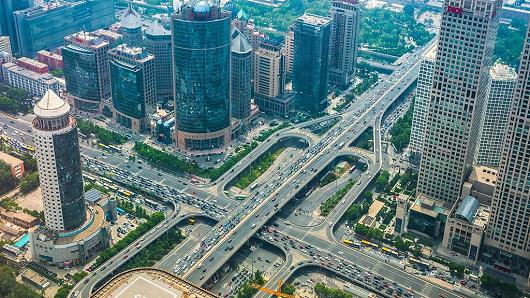 Guomao District in Beijing on February 1, 2016.

Fixed asset investment had been expected to grow 7.0 percent, cooling from 7.2 percent in the whole of 2017.

Private sector fixed-asset investment rose 8.1 percent, compared with an increase of 6.0 percent in 2017. Private investment accounts for about 60 percent of overall investment in China.

Analysts had expected sales growth to pick-up to 9.8 percent from 9.4 percent in December.

China combines January and February activity data in a bid to smooth out seasonal distortions caused by the timing of the long Lunar New Year holidays, which began in mid February this year but fell in January last year.

China is targeting retail sales growth of about 10 percent this year, but has not announced a goal for industrial output or fixed asset investment.

Premier Li Keqiang said last week China aims to expand its economy by around 6.5 percent this year, the same level that it handily beat in 2017 thanks in part to massive government infrastructure spending and record bank lending.