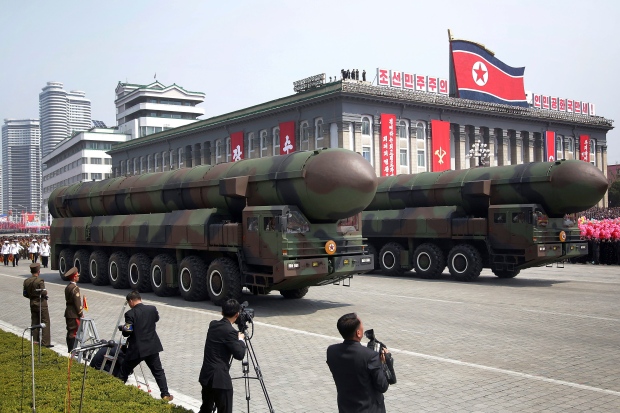 There can be no winners in a war between the U.S. and North Korea over Pyongyang’s nuclear weapons and missile programs, Chinese Foreign Minister Wang Yi said, while pledging support for dialogue between the sides as tensions have recently been on the rise.

Wang’s comments mark the latest attempt to cool things down by North Korea’s most important ally and key provider of food and fuel aid. Any fighting on the Korean Peninsula is likely to draw in China, which has repeatedly expressed concerns about a wave of refugees and the possible presence of U.S. and South Korean troops on its border.

A day after Wang spoke, North Korea displayed what appeared to be new long-range and submarine-based missiles, on the 105th birth anniversary of its founding father, Kim Il-sung, as a nuclear-powered U.S. aircraft carrier group steamed toward the region.

Missiles appeared to be the main theme of the large parade on Saturday, with Kim’s grandson, leader Kim Jong-un, taking time to greet the commander of the Strategic Forces, the branch of the military that oversees the missile arsenal.

Kim did not speak during the annual parade, but a close aide warned that the North would stand up to any threat posed by the United States.

Choe Ryong Hae said U.S. President Donald Trump was guilty of “creating a war situation” on the Korean Peninsula by dispatching U.S. forces to the region.

‘Our style of nuclear attack’

Goose-stepping soldiers and marching bands filled the square, next to the Taedonggang River that flows through Pyongyang, in the hazy spring sunshine as tanks, multiple launch  rocket systems and other weapons waited to parade.

CBC’s Saša Petricic was in Pyongyang, travelling with a government representative, as he watched the choreographed display of military might.

“You can feel the ground shake with every one of these platoons that go by. If you look to the other side (of the square), you can see rows and rows of senior officers who are clapping in unison,” he said.

“This is meant to show a level of defiance form North Korea.” 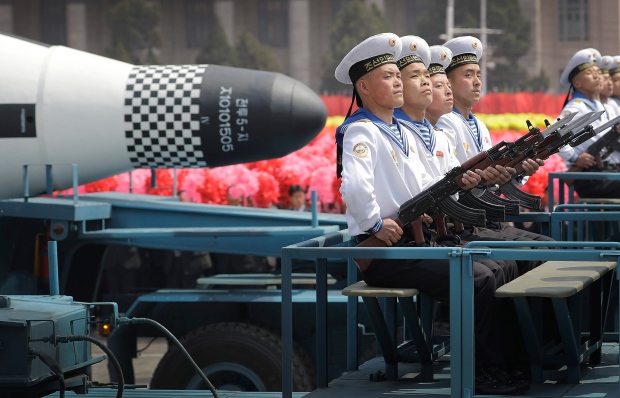 A series of what appeared to be KN-08 missiles were among the weapons rolled out on trucks. Analysts say the missiles could one day be capable of hitting targets as far as the continental United States, although North Korea has yet to flight test them.

The parade also included large rockets covered by canisters in two different types of transporter erector launcher trucks, or TELs, which can carry, move into launch position and fire missiles. An official from South Korea’s Defense Ministry couldn’t immediately confirm whether any of the rockets represented a new type of ICBM.

‘Once a war really happens, the result will be nothing but multiple loss. No one can become a winner.’
– Wang Yi, China’s foreign minister

Kim Dong-yub, a North Korea expert at Seoul’s Institute for Far Eastern Studies, said the canisters and trucks suggested that the North was developing technology to “cold launch” ICBMs, ejecting them from the canisters before they ignite. This would allow North Korea to launch its missiles without damaging its limited number of ICBM-capable launcher trucks and also make the missiles harder to detect after they’re fired, he said. Cold launches would also allow the missiles to be fired from silos.

Kim, the analyst, said it’s likely that North Korea is also developing solid-fuel ICBMs, and that some of the rockets inside the canisters on Saturday might have been prototypes.

China has grown increasingly frustrated with the refusal of Kim Jong-un’s regime to heed its admonitions, and in February cut off imports of North Korean coal that provide Pyongyang with a crucial source of foreign currency.

A booking hotline operator reached Saturday said there were no more flights to Pyongyang for the rest of the month. She said that according to a flight schedule, there would be flights in May, June and July, but that tickets were not available for booking or purchase yet. 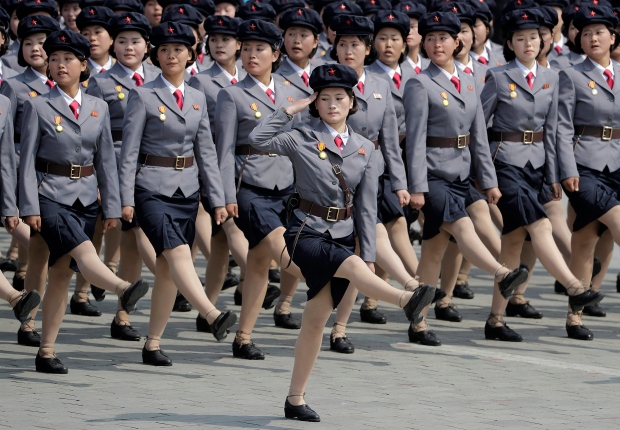 Air China and North Korea’s Air Koryo are the only two airlines serving that route, with the latter operating on Mondays, Wednesdays and Fridays.

“Once a war really happens, the result will be nothing but multiple loss. No one can become a winner,” Wang told reporters at a news conference with French Foreign Minister Jean-Marc Ayrault.

‘Stop provoking and threatening each other’

“Therefore, we call upon all the parties, no matter verbally or in action, to stop provoking and threatening each other and not to allow the situation to become irretrievable and out of control,” the Chinese foreign minister said.

He urged all sides to take a flexible approach to resuming dialogue.

“As long as dialogue takes place, it can be official or unofficial, through one channel or dual channels, bilateral or multilateral. China is willing to give support to all of them,” Wang said.

Wang last month urged North Korea to suspend its nuclear weapon and missile tests in exchange for South Korea and the U.S. putting their war games on hold, reviving a proposal first raised by Pyongyang. Washington swiftly dismissed the idea, but some observers have said administration officials may be becoming more amenable to renewed dialogue with the North.

Earlier Friday, North Korea’s Vice Minister Han Song Ryol told The Associated Press in an exclusive interview that his country will keep building up its nuclear arsenal in “quality and quantity” and said Pyongyang is ready to go to war if that’s what President Donald Trump wants.

Chinese experts said they see little immediate possibility of hostilities breaking out, but warned that Beijing will respond harshly to any further North Korean nuclear tests.

Director of Jilin University’s Institute of Northeast Asian Studies Guo Rui said that Trump’s domestic troubles should prevent him taking such action, while North Korea doesn’t appear to be on a war footing. Another nuclear test would invite tougher measures from Beijing, Guo said.

Pang Zhongying of the School of International Studies at Beijing’s Renmin University agreed that military action was unlikely, but said another North Korean nuclear test would mark “the crossing of a red line” that China was prepared to respond to.