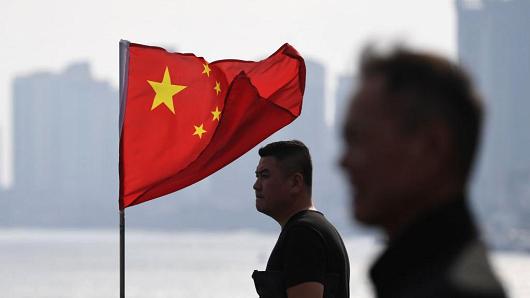 Two Chinese men stand near a Chinese flag as they look out towards North Korea while visiting the Broken Bridge, in the Chinese border city of Dandong, in China’s northeast Liaoning province on September 5, 2017.

China’s Foreign Ministry has expressed what it called “grave concern and opposition” to North Korea’s latest missile launch in an unusual rebuke of its neighbor and ally.

The ministry’s spokesman added that China would continue to uphold peace and stability on the Korean Peninsula and would work for “settlement on the North Korea nuclear issue.”

The public comments come after the isolated Communist state of North Korea launched yet another intercontinental ballistic missile, which it claimed was capable of reaching the U.S. mainland. The missile, the Hwasong-15, was ordered by leader Kim Jong Un and is the country’s the most powerful missile so far, according to a state televised broadcast.

There are widespread fears that North Korea is in the latter stages of developing nuclear warheads that could be attached to its ballistic missiles and aimed at the U.S. and its allies.

Although North Korea claims to have already developed and successfully tested such weapons, it’s hard to independently verify what stage of the process the regime has reached as the regime is so closed and secretive.

The comments from China’s Foreign Ministry are surprising as China has traditionally been one of North Korea’s few allies and is the country’s largest trading partner. It has shown signs of late that it is growing weary of North Korea’s provocations.

China has not previously revealed how it would react if the U.S. did attack North Korea but a Chinese state-owned newspaper, the Global Times, said in an editorial in August that “if North Korea launches missiles that threaten U.S. soil first and the U.S. retaliates, China will stay neutral.”

The paper, which is seen as a mouthpiece for the state, added that if the U.S. and South Korea tried “to overthrow the North Korean regime … China will prevent them from doing so,” Reuters reported.