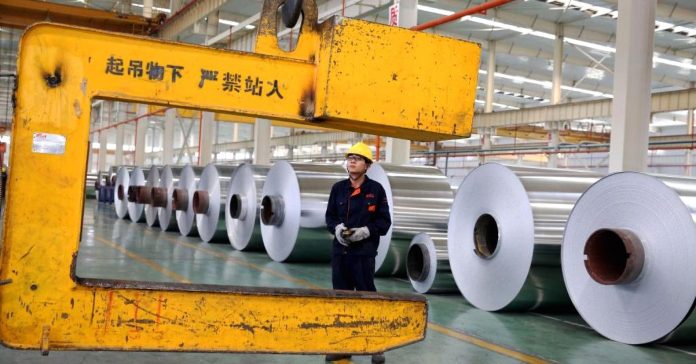 China has expressed “strong dissatisfaction” with the United States imposing anti-dumping and countervailing duties on Chinese aluminum foil, the Ministry of Commerce (MOFCOM) said on Wednesday.

“The U.S. has disregarded the WTO rules and seriously damaged the interests of China’s aluminium foil exporters. China is strongly dissatisfied with this,” Wang Hejun, the head of
MOFCOM’s Trade Remedy and Investigation Bureau, said in a statement.

The U.S. Commerce Department has made the wrong decision of levying high duties “without any evidence” and has “unreasonably and excessively” adopted trade remedy measures, which will affect its domestic employment and undermine the welfare of U.S. consumers, Wang added.

China will take necessary measures to protect its legal rights and interests in the U.S. wrongdoing, Wang added.

U.S. President Donald Trump is due to decide soon whether to impose much broader duties on steel and aluminum imports under a national security investigation amid mounting trade friction with China.

The U.S. Commerce Department said on Tuesday it would levy anti-dumping and countervailing duties on a number of Chinese firms, with dumping margins ranging from 48.64 percent to 106.09 percent and anti-subsidy rates of 17.14 percent to 80.97 percent.

In 2016, imports of aluminum foil from China were valued at an estimated $389 million, Commerce Department figures show.

Countervailing duty margins will be 17.14 percent for Jiangsu Zhongji, 19.98 percent for Dingsheng, 80.97 percent for Loften Aluminum (Hong Kong) Limited, Manakin Industries LLC and Suzhou Manakin Aluminum Processing Technology Co Ltd, and 18.56 percent for all other producers in China, it said.

The duties, which would last five years, remain subject to a finding of injury to U.S. producers by the International Trade Commission (ITC), which is due to announce its decision by March 15.

China has also expressed concerns over excessive protectionism in the steel sector by the United States, and urged it to show restraint in a probe into steel imports.