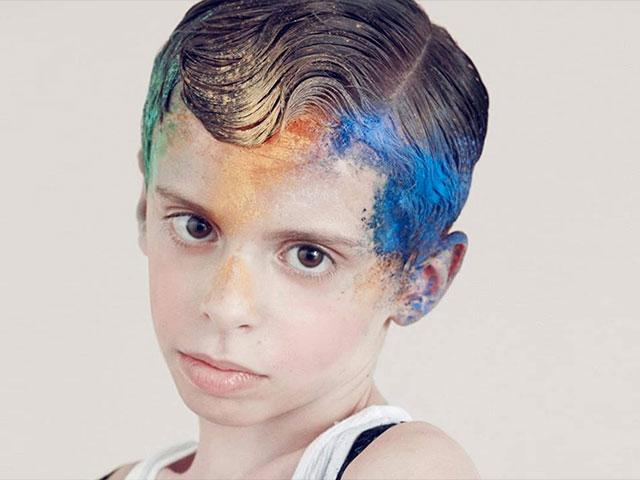 The annual New York City gay pride parade is known for its eccentric themes and over the top, sexually charged floats but this year’s headliner has left many in the gay community shaking their heads.

The organizers have employed a 10-year-old child as the ‘face’ of this year’s festivities.

The young boy, Desmond Napoles says he is unashamedly a boy who likes to dress as a woman but says he is not transgender, rather, he identifies as a “drag kid.”

On his social networks, “Desi” tells other young children they should not listen to their parents if they are told this is “sin” and advocates for kids to run away from home if they are not accepted.

Meanwhile this move to include children who considered themselves drag queens has some in the gay community up in arms.

Blogger Chad Felix Greene who writes extensively on the gay lifestyle, warns that the use of a child in suggestive poses crosses the lines of decency and is promoting a culture which views children as sex objects.

He’s not alone in his condemnation of the Gay Pride Committee’s choice.

Monica Burke of the Heritage Foundation tells CBN News society needs to slow down and take a good look at this movement.

Burke says, “We need to press pause on the transgender moment.”

She points to research which shows, “Normally, 80 to 95 percent of children will naturally grow out of any gender-identity conflicted stage. Unfortunately, many activists have given up on caution and advise drastic treatments, which range from social transition to puberty-blocking drugs and sex change surgeries.”

Hughes, president of Enough is Enough, is calling for America to put an end to this debauchery saying, “Children need to have a protected age of innocence, provided to them by their parents, adult family members, the community and the culture at large.”

Dr. Michelle Cretella echoes Hughes sentiment that the child should be our main priority.

Dr. Cretella, president of the American College of Pediatricians warns that this year’s gay pride parade is nothing more than a “celebration of pedophilia.”

Cretella says the parents of young Desmond are the ones who should be held accountable for allowing him to be exploited in this way.

She adds, “As a pediatrician I will go one step farther and say that the parents of these children and others promoting this are guilty of pedophilic grooming.”

While Cretella puts out the clarion call for parents to stand up she admits it’s a hard task to change the hearts and minds of people because, in her words, “Our culture is morally blind and has suppressed the scientific facts about homosexuality and transgenderism.”

Father Mark Hodges agrees that the country’s moral center is the problem and says the only way for the church to really fight this evil is to turn inward to check our own hearts and motives.

“The first place to go is one’s own heart, in repentance to God. This level of widespread moral rebellion could not have happened if we Christians had not succumbed to the temptations of the world,” Hodges says.

Father Hodges, of St. Stephen Orthodox Church admits we all have slipped in one way or another and he openly repents for his part in allowing the culture to sink to this level. But all is not lost.

He suggests that Christians prioritize the family by making sure the children have both the influence of mother and father.

Beyond that, Hodges advocates for Christians to stand up and stand together despite our personal differences.

“No matter how strongly you feel about healthcare or immigration or foreign affairs or the economy, the culture wars are where Christians must put aside differences to stand together,” Hodges says.