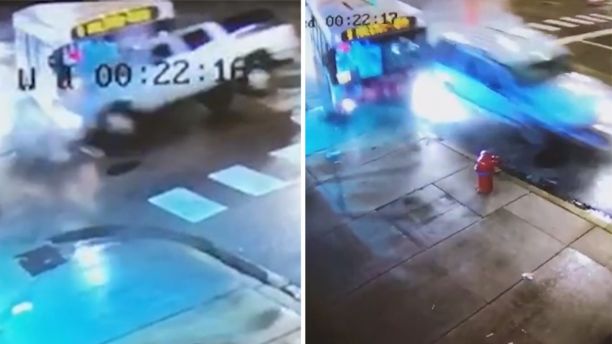 Six people were injured after a Chicago Transit Authority bus and SUV collided before the vehicle then veered into a bus shelter early Wednesday in a dramatic crash captured in surveillance video.

The driver of the SUV was attempting to turn left at an intersection on the city’s South Side when he was struck by the CTA bus around 12:30 a.m., police told the Chicago Sun-Times.

After the collision, the bus can be seen on surveillance video veering onto the sidewalk where it strikes a tree and fire hydrant before hitting a CTA bus shelter.

Authorities said no one was in the bus shelter at the time of the crash.

Six people were injured after a CTA bus collided with an SUV on Chicago’s South Side.

Shayna Whitem, who was the liquor store on the corner where the crash took place, told ABC 7 the whole incident was “terrifying.”

“The whole building shook like an earthquake,” she said.

Five passengers on the bus, four men and one woman, were taken to the hospital where they were treated and released.

The man driving the SUV was taken to the hospital and later cited for failure to yield and driving without a license or insurance, police told the Sun-Times.