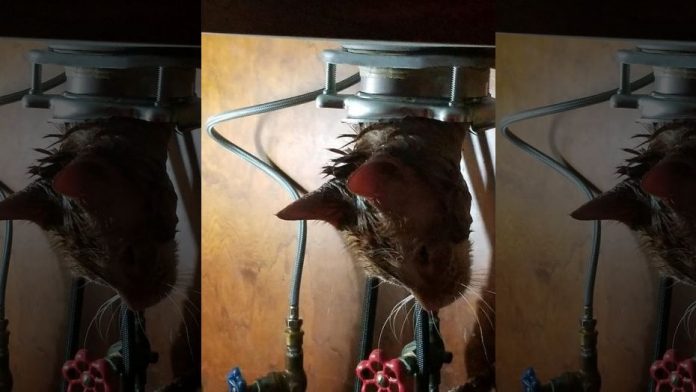 A cat was rescued by a police officer after it got stuck in a garbage disposal.

A catastrophe was avoided Saturday thanks to a Pennsylvania police officer.

A “curious” cat got himself in a messy situation when he got stuck in a garbage disposal at a Wayne house in Tredyffrin Township, about 24 miles northwest of Philadelphia.

“It was a ‘kitten situation’ this past Saturday in Tredyffrin Township, after our Officers were called to the Residence of a Family in the Wayne section whose cat got just a lil’ TOO curious – and was stuck in their garbage disposal!” Tredyffrin Township Police Department wrote on Facebook Wednesday.

A picture of the cat showed its wet head poking out of the disposal underneath the sink. Tredyffrin Township Sgt. Brian Hughes arrived at the scene to help the family free the cat by using coconut oil.

“After grabbing a few tools, and a bit of coconut oil, SGT. Hughes worked for an hour to safely disassemble the disposal and successfully free the trapped feline!” the department explained.

Fortunately, the cat was unharmed.

The department added, “Who says only Firefighters rescue cats,” referring to the image of firefighters being called to save felines stuck in trees.

Facebook user Lynn Allendorf Naimoli, who appeared to be the cat’s owner, commented on the post Wednesday, saying Hughes and her son worked to “calmly” release the cat named Sam.

“He is fine now, but has been trying to find the ‘monster’ who pulled him in!” she wrote.