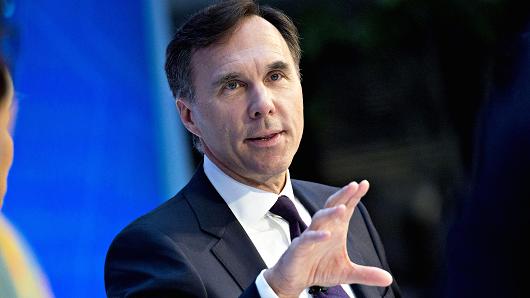 “The discussion around the steel and aluminum tariffs clearly demonstrates the strength of our relationship” with the U.S., Morneau said in an interview with CNBC’s “Squawk Box.“

On Thursday, Trump signed two proclamations that implemented broad import tariffs of 25 percent on steel and 10 percent aluminum. But Canada and Mexico were exempted at a time when those two nations and the United States are trying to renegotiate the 1994 North American Free Trade Agreement.

“There’s an understanding that we trade together, that we’re part of an integrated North America,” he added.

Commerce Secretary Wilbur Ross, whose department recommended the tariffs, told CNBC shortly after Trump’s signing ceremony: “There’s no question that the action the president took today is a further motivation to both Canada and Mexico to make a fair arrangement with the United States.”

Earlier in the week, Ross had forecast on CNBC that Trump would likely provide a degree of flexibility on tariffs for Canada and Mexico, a softening from the hardline plan the president unveiled last week. Ross on Wednesday said the White House is “not trying to blow up the world.”

Trump on Monday had also dangled the possibility of dropping his call for steel and aluminum tariffs if NAFTA is renegotiated to terms more favorable to the U.S.

Regarding the NAFTA talks, Morneau said Canada is working to get a better deal. He said Canada sees the trade agreement as helping both American and Canadian workers.

“Getting to a better arrangement, recognizing a whole host of economic issues that weren’t the case 30 years ago … it takes some working together and we are cautiously optimistic that we’re going to get there,” he said.

Morneau, an accomplished business leader, was appointed to his position in 2015. In 2012, he was appointed as Pension Investment Advisor to Ontario’s Minister of Finance.