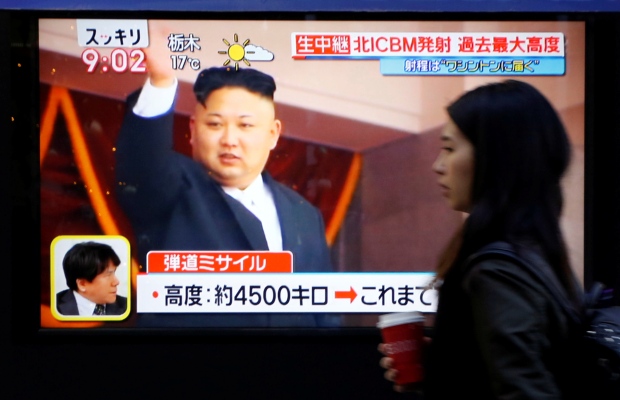 Canadian and U.S. officials quietly held exercises last spring to practise dealing with worst-case nuclear scenarios — running through simulated attacks on both sides of the border, CBC News has learned.

The training took place against the backdrop of federal officials in this country discreetly revising contingency plans, including one to reconstitute the federal government outside of Ottawa should the capital become “unviable” in an attack or natural disaster.

Exercises are done on an annual, or semi-annual, basis, but the latest came amid fresh urgency in light of the worsening international climate, particularly with North Korean nuclear and intercontinental missile tests, the latest of which happened Tuesday.

What is generally not well appreciated is how reliant Canada would be on the U.S. in the event of either a nuclear-tipped missile landing in this country, or some kind of terrorist dirty bomb.

Documents filed recently in Parliament, in response to a written question by the Conservatives, refer to a number of contingency plans, many of which fall back on co-operation with Washington.

A nuclear scenario was incorporated into a regular exercise, known as Staunch Maple, last spring.

The Department of National Defence acknowledged, at the time, that the training scenario involved a “security incident.”

But a series of government officials, speaking to CBC News on background, confirmed the scenario was designed to test the reaction of officials to “a nuclear event.”

Earlier iterations of Staunch Maple involved things such as earthquake response in B.C.

The Canadian drill, which took place last April, was conducted in tandem with a much larger U.S. exercise, known as Gotham Shield, which simulated a nuclear attack on New York City.

Much of the current political debate about the threat posed by North Korea revolved around whether the U.S. would defend Canada during a missile attack.

There has been little discussion about what the aftermath might look like and how prepared the country would be to deal with the consequences.

A spokesman for National Defence said there are contingency plans that cover “a wide range of scenarios involving attacks on Canada, including a missile attack.”

Dan Le Bouthillier said a series of contingency plans were reviewed as recently as last spring, but he added periodic assessments are made to ensure they stay current.

A senior defence official, speaking on background, said the issue of whether North Korea could effectively “hurl a hunk of metal across the Pacific and possibly hit us,” has preoccupied defence planning in this country for a while.

Prime Minister Justin Trudeau acknowledged the hazard in a recent town hall but suggested it relates more to be being caught in the middle, rather than being deliberately targeted.

“There are potential challenges for intercontinental ballistic missiles from North Korea passing over Canadian territory,” he said in Charlottetown.

The answer to the question of what would happen in the event of a missile strike would depend strictly on the warhead and where it landed, according a number of current and former officials, who spoke to CBC News on background.

Canadian decision-makers would be notified of a missile launch and its trajectory by Norad’s warning centre. A decision about trying to shoot it down would be made solely by the U.S., because Canada is not part of its ballistic missile defences.

Much of the initial post-impact response would fall on local police and municipalities.

The responsibility, however, would be quickly passed along to the federal government and Public Safety Canada, which is in charge of emergency management.

Picking up the phone to Washington is among the very first things Canadian officials, both military and civilian, would do in the event that the missile was nuclear-tipped.

A non-nuclear blast, although devastating, would likely not require an immediate call to Washington for assistance. It is in the aftermath of a nuclear explosion, even a small one, that Canada is vulnerable. 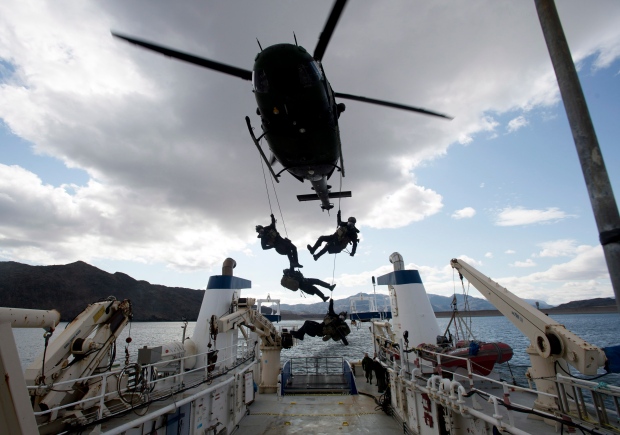 Members of the Canadian Joint Incident Response Unit rappel onto the deck of the ship Strait Explorer. The unit would require help from the U.S. National Guard in the event of a nuclear attack. (Adrian Wyld/Canadian Press)

The country’s military, mostly through the special forces, and the RCMP have the capability to help clean up contamination sites and treat irradiated victims.

That organization is known as the Canadian Joint Incident Response Unit. But its capacity to carry out the dangerous work is limited by their size and they would require assistance of U.S. National Guard units.

A few years ago, the former Conservative government signed a memorandum with Washington to make it easier for each country’s armed forces to operate on both sides of the border.

During the 2010 Vancouver Olympics, U.S. troops were quietly deployed in the event of a terrorist “dirty bomb” incident.

The commander of Canada’s special forces, Maj.-Gen. Mike Rouleau wouldn’t comment on the North Korean situation, nor contingency planning, but said the government’s latest defence policy will allow him to increase the size of his nuclear, biological and chemical team by as many as 70 people.

The military and government officials may be well-prepared to make decisions in the aftermath of a worst-case scenario, but many experts question whether political leaders have wrapped their heads around such eventualities.

The general in charge of the country’s joint operations command said cabinet ministers and the prime minister occasionally participate in exercises, and when they’re not available an official will sit in their chair.

“The ideal would be everybody is available all of the time to be able to do this. That is not the world in which we live,” said Lt.-Gen. Steve Bowes, who has sat in on many of the drills. “The important thing is to make sure the leader understands their authority, their responsibilities and accountability. It’s not just about the individual, it’s about the organization. We’re much stronger in ways that don’t think people appreciate.”