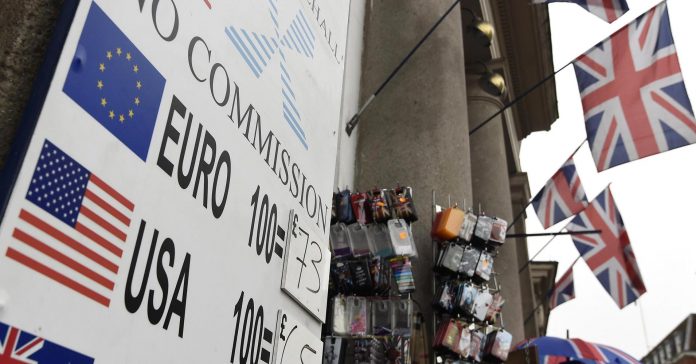 Similarly, if someone bought sterling five days before the election day and sold it five trading days after, the average return was -1.05 percent.

“Due to the volatility that can be caused by major political events such as elections, I think it is the case that many investors avoid currency trading close to such an event with only speculators choosing to be involved close to the date of a ballot,” Jane Foley, Rabobank’s strategist responsible for the G-10 currencies, told CNBC via email.

She noted that each election has a different backdrop which influences trading. Perhaps the main influencing factor this June 8 is the U.K.’s departure from the European Union.

Meanwhile, Roger Hallam, currency chief information officer at JPMorgan Asset Management, told CNBC: “We believe that the upcoming U.K. general election will allow the prime minister to consolidate and grow her majority, while providing better scope for transitional arrangements so that the probability of a ‘cliff’ exit becomes lower –which reduces the severe tail-risks for sterling.”

“But assuming the U.K. pursues a reasonably hard Brexit approach, (which means that most current links with the EU would be lost) the period will certainly be challenging from an economic and capital flows perspective. Our shorter-term view of a bounce in GBP/USD towards 1.30, based on the general election triggering a short-covering move in sterling, has now largely been realized,” he added.

On Tuesday GBP/USD was trading at around 1.2870 against the dollar.

As Jane Foley from Rabobank noted, “this time the market is unusually short of GBP ahead of this election. This suggests scope for a relief rally in GBP after the election. That said, the fact that opinion polls are fairly sure of the result this time suggests that volatility on the election result should be limited.”

Recent polls continue showing an election victory for the Conservatives but the Labour Party has been narrowing the gap.

A poll by Survation for ITV on Tuesday gave Labour 37 percent of the voting intention, up three points on a week ago and six points behind the Tories. The Conservatives received 43 percent in the same poll.

The Liberal Democrats came third with 8 percent of votes and UKIP (The U.K. Independence Party) obtained 4 percent. The SNP (Scottish National Party) got 2 percent and the Greens 1 percent.

“The markets were taken by surprise in mid-April when Theresa May called a snap general election, but aside from an initial flurry of excitement, FX investors had shown little interest in what the opinion polls indicated was a one-horse race,” JP Morgan said last week on a research note.

“In our judgement the election will not affect the modal outcome for Brexit or GBP assuming that the Conservatives win – Brexit is still likely to feel rather hard insofar as it is liable to circumscribe the UK’s single market access, even if the change in the electoral timetable should temper the tail risk of an outright disorderly Brexit in 2019.”

Disclosure: NBCUniversal, parent of CNBC, is a minority investor in Kensho.