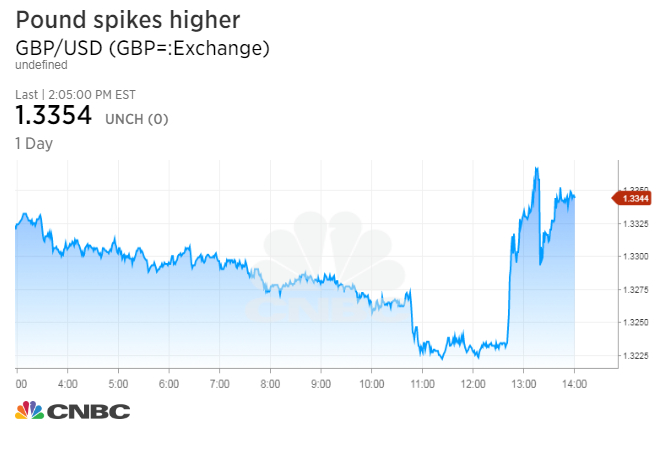 The British pound spiked higher Tuesday afternoon after a report that the European Union and the United Kingdom reached deal on the so-called ‘Brexit bill.’

Both British and EU sources told UK-based The Telegraph that an agreement-in-principle has been struck over the EU’s demand for a €60 billion (roughly $71 billion) financial settlement.

The currency was volatile after the initial report when Reuters reported that a British government official said they did “not recognize” The Telegraph’s account.

But the pound resumed its upward course after the Financial Times confirmed parts of The Telegraph’s initial report.

The currency then whipsawed following the Reuters report, but ultimately rose again after the Financial Times confirmed the original Telegraph report. The FT reported that the UK would assume EU liabilities worth up to €100 billion although “net payments, discharged over many decades, could fall to less than half that amount.”

This precedes a crucial lunch next week between UK leader Theresa May and European Commission President Jean-Claude Juncker. Investors have been on edge for months as the details of the the so-called Brexit unfold, awaiting a final accord from the European Union and May. May will formally present the agreement next week as part of a package deal if agreement can be found on other issues including citizen rights, according to the Financial Times.