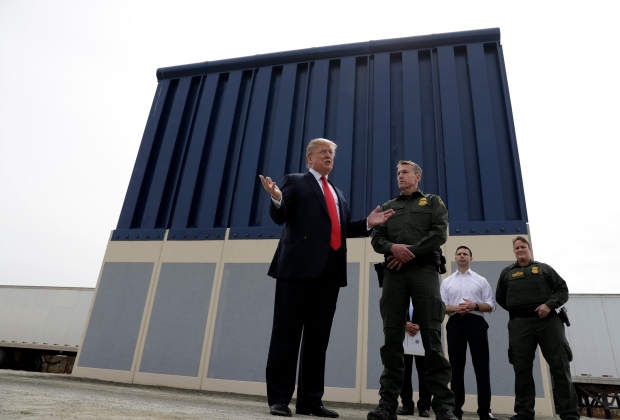 Dozens of pro- and anti-Trump demonstrators gathered on opposite sides of the street Tuesday as President Donald Trump’s motorcade entered a restricted area in the outskirts of San Diego, Calif., so he could see prototypes of his proposed border wall with Mexico.

The two sides were separated by a heavy presence of police officers in helmets and riot gear, but the rallies were peaceful. Demonstrators on each side carried signs and shouted.

Several dozen people along the motorcade route took photos. One hoisted a Trump flag and others raised middle fingers.

Protesters chanted, “No ban! No wall!” near the San Ysidro crossing, where tens of thousands of people enter the U.S. daily from Tijuana, Mexico, many on their way to work or school in San Diego. Drivers honked as a show of support.

Pro- and anti-Trump demonstrations were planned later in the day in Los Angeles for the president’s arrival there.

Other protests were planned later in Tijuana and San Diego to mark Trump’s first presidential visit to California, where he examined eight nine-metre-tall prototypes built last year along the border in a bid to fulfil his signature campaign promise.

Trump has long said he wanted to visit the models himself so he can pick a winner, though the Department of Homeland Security says elements of each design are expected to be used.

The president was also expected to speak Tuesday with immigration enforcement officials and with marines at Marine Corps Air Station Miramar before heading to a fundraiser in Los Angeles.

On Twitter, Trump said the wall will pay for itself, a shift from his oft-repeated statements during his 2016 presidential campaign that Mexico would pay.

“According to the Center for Immigration Studies, the $18 billion wall will pay for itself by curbing the importation of crime, drugs and illegal immigrants who tend to go on the federal dole…” https://t.co/NdLC6jZwWE

San Diego’s Republican mayor criticized Trump’s short visit, saying the president wouldn’t get a full picture of the city. Kevin Faulconer said that if Trump stayed more than a few hours, he would see that a strong economy and free trade aren’t a contradiction but a way of life.

The mayor, a business-friendly Republican and ardent supporter of the North American Free Trade Agreement, said a popular cross-border airport terminal connecting San Diego and Tijuana shows that “building bridges has worked wonders.” The terminal is a few miles from the border-wall prototypes.

Trump had campaigned against NAFTA as a job killer that he said encouraged American companies to move factories to Mexico to exploit cheap labour. Renegotiation of the deal began last summer.

Faulconer, writing in the San Diego Union-Tribune, also said San Diego police work to protect everyone regardless of immigration status, an apparent dig at Trump’s push to target illegal immigration.

The issue has led to heightened tensions between California and the Trump administration. The Justice Department recently sued over state laws that limit co-operation with immigration authorities, which state officials have harshly criticized.

Jeff Schwilk, founder of San Diegans for Secure Borders, whose group participated in a rally in December near the prototypes that ended in clashes with counter-protesters, said the council’s resolution does not reflect the views of many residents who feel the border is not secure.

“We absolutely want President Trump to feel welcome and to come inspect the prototypes so we can get the wall built.” 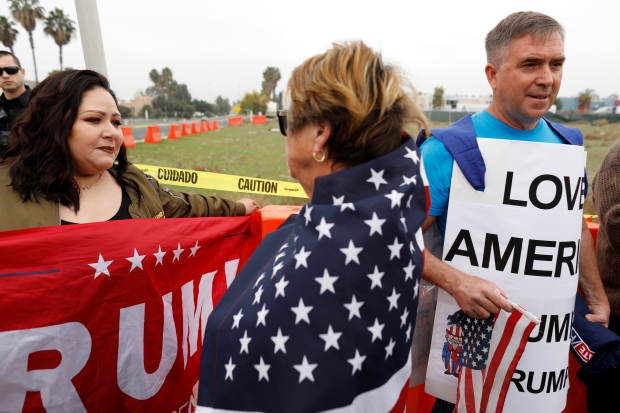 Supporters and protesters talk as they wait for Trump to arrive in San Diego on a visit Tuesday to view border wall prototypes. (Mike Blake/Reuters)