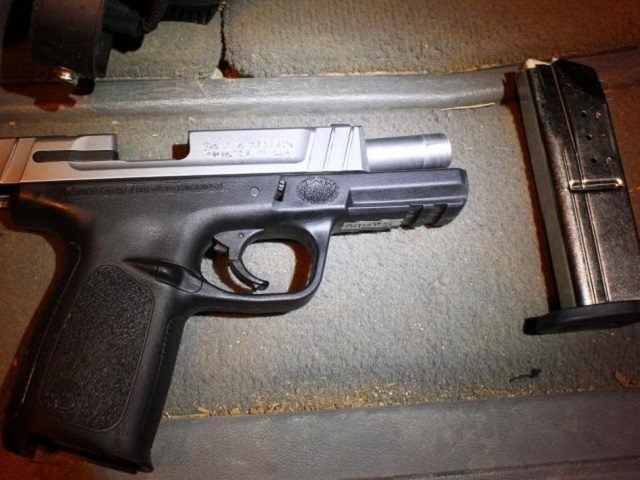 Border Patrol agents from the Ajo Station stopped the driver of a Dodge minivan that was being driven westbound on Interstate 8 near the town of Gila Bend, Arizona. The agents conducted a roadside immigration inspection and determined that all for occupants were Mexican nationals illegally present in the United States, according to information obtained from U.S. Customs and Border Protection (CBP) by Breitbart Texas.

Agents conducted a search of the minivan and discovered a 9mm pistol and ammunition. The agents attributed the handgun to the driver of the vehicle.

Officials seized the Dodge minivan along with the handgun and ammunition.

The images were taken in an area of the Tucson Sector in the Huachuca Mountains. The region is controlled by a transnational criminal organization known as Los Salazar. The regional cartel is aligned with the Sinaloa Federation. Other criminal groups in the Sinaloa Federation are warring against Los Salazar and this manifests in this portion of Arizona becoming their battleground. The other groups send “rip crews” into Los Salazar’s smuggling turf in efforts to steal their drug loads on U.S. soil. The area is not only full of Mexican cartel smugglers, but other cartels’ rip crews are present and U.S. prison gangs and other gangs stalk the area to steal drug loads as well. Such rip crews consist of armed criminals attempting to rip or steal cartel drug loads as they are in transit.

Tucson Sector Border Patrol Chief Rudolfo Karisch spoke with Breitbart Texas on the images and stated, “These appear to be authentic of criminal organizations coming across the border. This is not unique to Arizona, we have seen this in other parts of the country as well all along the Southwest border. Any time you have illicit commodities crossing the border, you will have criminals trying to protect those commodities — both from law enforcement and from other bad guys.

Read the full article and see the photos at Breitbart Texas.