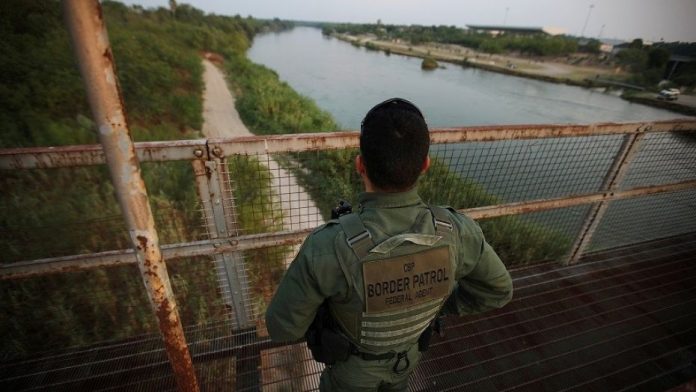 May 11, 2017: A U.S. border patrol agent looks over the Rio Grande river at the border between United States and Mexico.

A U.S. Border Patrol agent was wounded after being struck by a bullet fired from Mexico, authorities said Wednesday.

The agent, whose name was not released, was shot from the Mexican side of the Rio Grande River near Brownsville where he was assigned to patrol it by boat, according to the Brownsville Herald.

U.S. Customs and Border Protection spokesperson Marcelino Medina said in the agent suffered a non-lethal injury from a caliber weapon after an assault from the Mexican side.

“On Tuesday, December 26, 2017, a Border Patrol Agent assigned to the Riverine Unit sustained a non-life threatening injury from a small caliber weapon resulting from an assault originating from the Mexican Riverbank,” Medina said. “The agent suffered a grazing wound to the back of his head as a result of the incident and has been medically evaluated and released.

The case is now under investigation with the participation of the FBI.

The incident follows the mysterious death of border patrol agent Rogelio Martinez and his partner’s assault last month after responding to an unspecified “activity” in a culvert off Interstate 10 in Van Horn, Texas.

Many have questioned what exactly happened, with some suggesting the men got injured in a traffic accident. But according to an FBI agent’s sworn affidavit, the authorities suspect it was “a violent assault” on two border patrol agents. The culprits remain unknown.