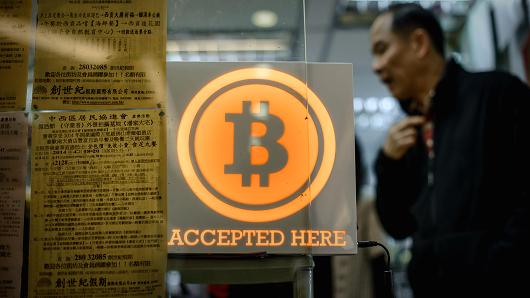 A man walks out of a shop displaying a bitcoin sign during the opening ceremony of the first bitcoin retail shop in Hong Kong.

Bitcoin jumped more than 2 percent Tuesday to its highest since Jan. 4 amid a surge in speculative activity in Chinese exchanges after a drop in China’s foreign exchange reserves.

“The volume in the Chinese exchanges is starting to pick up again,” said Brian Kelly, founder of Brian Kelly Capital and a CNBC contributor. He is long bitcoin and also noted the move comes as the U.S. Securities and Exchange Commission reviews an exchange-traded fund (ETF) that tracks bitcoin’s price.

On Tuesday, trade volume in Chinese bitcoin exchanges such as OKCoin was 14,500, a level not seen since the end of January, according to market data site TradeBlock.com.

The rise in the digital currency followed overnight news that China’s closely watched foreign exchange reserves fell by $12.3 billion in January to $2.998 trillion. Although the pace of decline slowed, the drop below the psychologically key $3 trillion level renewed attention on how much Beijing is struggling to support the yuan and prevent capital outflows.