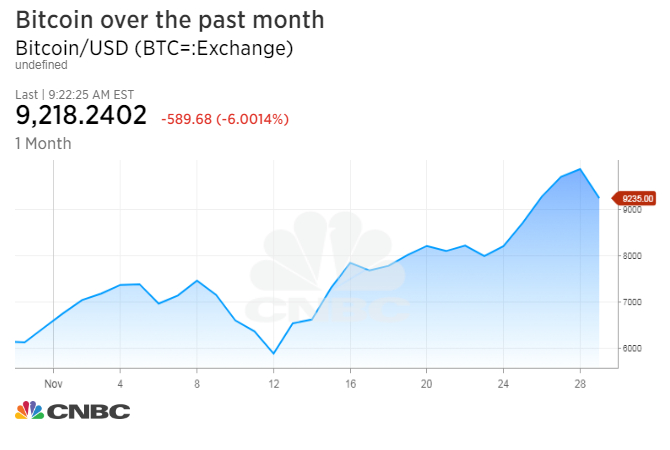 It’s been a wild ride for bitcoin traders.

From Wednesday’s high of more than $11,000, bitcoin has fallen to a low of $9,021.85 on Thursday, a roughly 20 percent drop. The crypotocurrency is in a period of extreme volatility after a strong showing over the Thanksgiving holiday weekend, when it set multiple all-time records.

But despite the cryptocurrency’s sharp decline after hitting an all-time high, it could fall to near $7,000 without doing much damage on a technical basis, said Mark Newton, managing member of Newton Advisors.

“I would say that you’ve seen several important, pretty severe corrections to bitcoin over time and it’s managed to come back,” Newton told CNBC on Thursday. “From a percentage standpoint, the volatility isn’t that different than what you’ve seen in August.”

Volatility is nothing new for the digital currency. One of the major grievances leveled at bitcoin has been regular swings in value, a trend unbecoming of a global means of monetary exchange. Bitcoin’s more than 1,000 percent appreciation over the past year has also drawn bubble concerns.

“I think this [crypto] is going to be the biggest bubble of our lifetimes by a longshot,” he said at the CoinDesk Consensus: Invest conference in New York. “To be fair, this is a bubble and there’s a lot of fraud mixed in. We look at tons of projects. And some get funded, and they literally look like Ponzis. There’s a lot of froth and fraud in something that’s exciting as this.”

But bitcoin is growing in acceptance across Wall Street. A Nasdaq official told CNBC that it plans to launch bitcoin futures as early as the second quarter of next year.