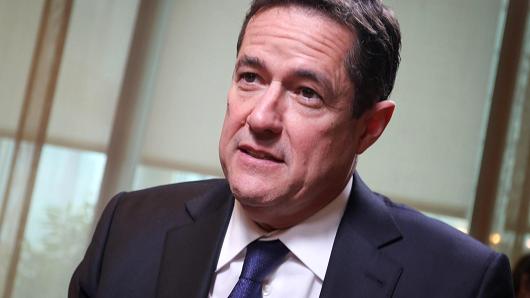 Jes Staley, CEO of Barclays, is being investigated for his conduct in a whistle blowing incident in 2016.

Barclays expects to take a writedown of about 1 billion pounds ($1.34 billion) on its annual post-tax profit as a result of the U.S. tax overhaul, the bank said in a statement on Wednesday.

The reform to the tax system signed into law by President Donald Trump on Dec. 22 will force the British lender to reduce the value of its deferred tax assets, prompting it to take a one-off charge in its results for the 12 months to the end of December.

It will also lead to the bank’s common equity Tier 1 capital ratio, a key measure of its financial strength, falling by about 20 basis points, the lender said.

Since taking the helm at Barclays in December 2015, Chief Executive Jes Staley has streamlined the bank into a transatlantic lender focused on the United States and Britain.

The restructuring has led it to exit a raft of non-core operations, such as its business in Africa and units in Asia, in a bid to simplify its structure and boost returns to shareholders.

Barclays already slumped to a 628 million pound attributable loss in the nine months to the end of September following write-offs in the wake of its exit from Africa. The 1 billion pound charge to account for the U.S. tax changes is expected to push it further into the red.

The $1.5 trillion tax overhaul is the biggest reform of the U.S. tax system since the 1980s and will see that corporate tax rate slashed to 21 percent from 35 percent.

While Barclays said the reduction in the tax rate is expected to “positively impact” its future post-tax earnings in the United States, it also cautioned that the Base Erosion Anti-Abuse Tax (BEAT), which was included in the legislation and designed to prevent multinational firms from abusing the tax code, could significantly offset that benefit.

“Due to the uncertain practical and technical application of many of these provisions, it is currently not possible to reliably estimate whether BEAT will apply and if so, how it would impact Barclays,” the lender added.