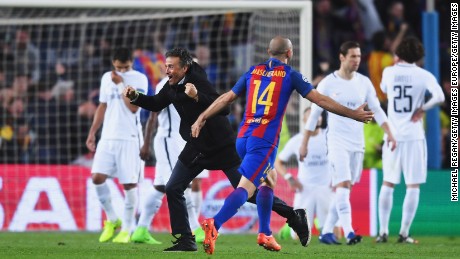 Having lost the first-leg 4-0 in Paris, few had given Barca a chance of reaching the last eight given no side had previously overturned such a deficit in the history of the competition.

But Luis Enrique’s side made a barnstorming start to the match and early in the second half a Lionel Messi penalty gave them a 3-0 lead in the Camp Nou.

The home side were coasting, but just past the hour Uruguayan striker Edison Cavani’s volley seemingly put PSG back in control, with Barca needing to score three more times, given the French side now had a crucial away goal.

In the 91st minute Luis Suarez, who had given Barcelona an early lead, won a penalty, which Neymar converted.

With time running out Barcelona threw everyone forward — even their goalkeeper Marc-André ter Stegen.

And almost with the last kick of the game Barca’s sixth goal came from the most unlikely of sources — not their famed strikers — Messi, Neymar or Suarez — but defender Sergio Roberto, who was born in Catalonia and is a product of Barca’s youth academy.

Bayern Munich’s French international Franck Ribery, who played for the German club in Tuesday’s 5-1 thrashing of Arsenal, described the game as “unbelievable.”

In the 2005 Champions League final, Liverpool came back from a 3-0 deficit to beat AC Milan on penalties, but Barca’s victory is arguably the greatest comeback in Champions League, given those frantic and frenetic final seven minutes.

Barca’s president Josep Maria Bartomeu said on the club’s Twitter feed it was an “historic achievement that will be remembered forever.”

Ahead of Wednesday’s game, Enrique had remained quietly confident that his team could achieve the unthinkable.

“We arrive in good form and we have to be confident,” Enrique told reporters, referring to Barca’s two previous league victories, where his team had beaten Sporting Gijon 6-1 and Celta Vigo 5-0.

“We are in the middle of the tie, we have nothing to lose and a lot to win — if they scored four, we can score six,” added the strangely prophetic Barca coach.

PSG’s English Twitter feed had just one word to sum up the French club’s defeat: “Gutted.”

The hope was that Emery’s tactical nous would help PSG’s billion dollar fueled quest to win the Champions League and in the first leg the French club had run ragged a strangely subdued Barca.

PSG will be left wondering just how they exited the Champions League given their commanding performance and lead they had established in the first leg.

Luck certainly wasn’t on their side on Wednesday — Barca’s second goal came from a Layvin Kurzawa own goal, Cavani hit the post, while the home side’s first penalty derived from Thomas Meunier’s slip, causing Neymar to tumble.

The scenes in the Nou Camp press area looked as chaotic as events on the field, with journalist Reshmin Chowdhury tweeting a video of his media colleagues trying to come to terms with what they had just witnessed.

“This is a crazy, unique sport,” said Enrique after the game. “I dedicate this win to all Barça fans who kept faith in us.

“No one stopped believing,” added the Barca coach. “The team were spectacular. We were rewarded in the end.”

In Wednesday’s other quarterfinal Borussia Dortmund beat Benfica 4-0 to win their tie 4-1 on aggregate.