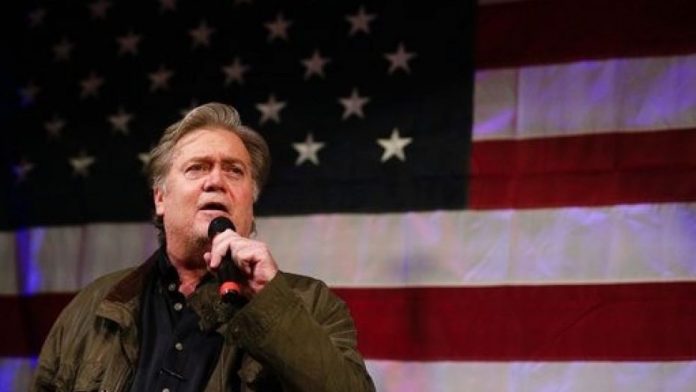 Bannon is expected to appear at a Moore rally next week – as the Dec. 12 election between Moore and Democrat Doug Jones draws closer. The candidates are vying for the Senate seat once occupied by U.S. Attorney General Jeff Sessions.

The appearance by Bannon would mark a strong show of support for Moore, a candidate engulfed in sexual misconduct allegations.

Bannon’s Alabama plans surfaced after a report said he had no intentions of returning to Alabama. People associated with Bannon had confirmed the report.

But apparently Bannon has changed his mind.

“I look forward to standing with Judge Moore and all of the Alabama deplorables in the fight to elect him to the United States Senate, and send shockwaves to the political media elites,” Bannon told CNN.

“I look forward to standing with Judge Moore and all of the Alabama deplorables in the fight to elect him to the United States Senate, and send shockwaves to the political media elites.”

“Look, he denies it,” Trump said. “He says it didn’t happen, and you know, you have to listen to him also.”

But the White House said Monday that the president has no plans to campaign for Moore, whose Senate bid is seen as a brainchild of the Bannon’s anti-establishment agenda.

In September, Moore defeated incumbent U.S. Sen. Luther Strange in the state’s GOP primary. The defeat of Strange, an establishment Republican backed by Trump, signaled a changing tide of politics in the party.

But following the allegations against Moore — brought forth by multiple women, including some who said Moore approached them when they were teens while Moore was in his 30s — Bannon refrained from campaigning in Alabama.

However, Moore has denied all the claims of sexual misconduct, saying Monday night at a campaign rally that the allegations were “simply dirty politics.”