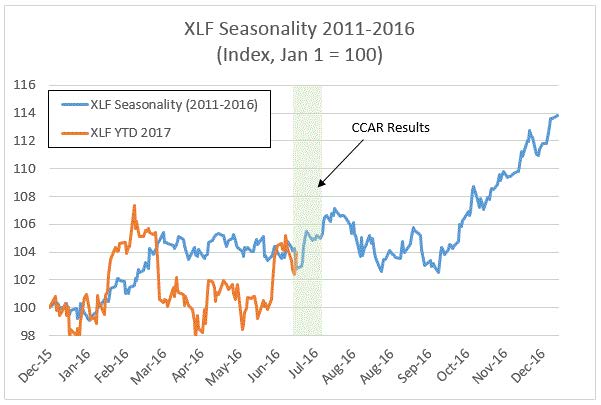 The central bank did not object to any of the buybacks or dividend hikes from the 34 banks it reviewed during the second phase of its annual stress test. This is the first time in the seven-year history of the tests implemented in the wake of the financial crisis that all banks have passed.

JPMorgan announced a repurchase program of up to $19.4 billion, its biggest since the financial crisis. Citigroup unleashed its largest ever buyback program — worth up to $15.6 billion — and doubled its dividend. Bank of America and Morgan Stanley hiked their quarterly dividends to 12 cents a share and 25 cents a share, respectively.

“We continue to like large bank stocks, even though they have recovered recently, due to potential for strong capital return, rising dividends and benefit from regulatory reforms even over the next couple of years,” Vivek Juneja, an analyst at JPMorgan, said in a note Thursday. “In addition, there is potential for more rate hikes offsetting weak loan growth and modest fee income growth.”

History shows bank stocks have typically bounced around the release of these stress tests.

MKM Partners created a composite chart of the price action by the Financial Select SPDR ETF and found the stress tests usually mark a turning point for the sector.

Senior Fed officials said on a call with journalists Wednesday that the number of banks tested this year has declined from previous years, and that not objecting to a plan doesn’t mean a bank has fully met the Fed’s expectations.

The Fed’s blessing of the big banks comes at a time when the central bank expects to raise benchmark interest rates once more this year.

That said, the broader market failed to move higher as a fall in tech weighed on the major stock indexes.

Tech has been the best-performing sector for most of 2017, rising more than 15 percent in the period. But over the past month it has dropped nearly 2 percent.

Elsewhere, yields continued to climb higher on Thursday, with the benchmark 10-year note yield trading near 2.28 percent; it started the week around 2.15 percent.

“The bond market had very low expectations for higher interest rates this year,” State Street’s Arone, noting the market doubted central banks would be able to tighten monetary policy as much as they had hoped. “Now, with Draghi’s comments, they’re re-evaluating those possibilities.”

Earlier this week, European Central Bank President Mario Draghi said: “The threat of deflation is gone and reflationary forces are at play,” sending European yields higher and dragging their U.S. counterparts with them.

The ECB tried to walk back those comments later in the week, but the sell-off in the U.S. and European bond markets did not abate.

In economic news, the U.S. economy grew at an annualized rate of 1.4 percent in the first quarter, according to the Commerce Department’s final first-quarter GDP read.

—CNBC’s John Melloy and Evelyn Cheng contributed to this report.