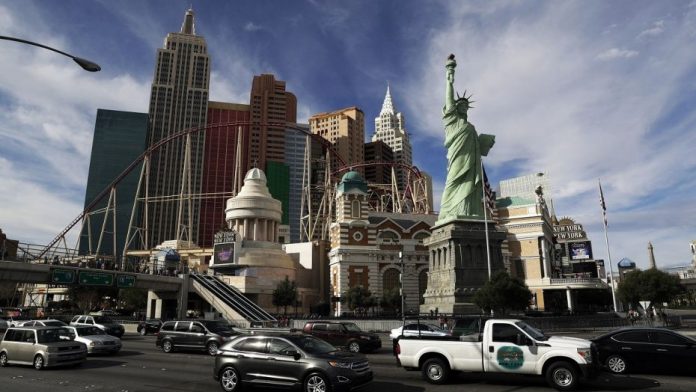 File Feb. 21, 2017: The New York New York hotel and casino on the Las Vegas Strip. Bandits have gotten away with cash and chips from four casino-hotels in Las Vegas since last week, leaving police on the hunt for multiple suspects. “It’s unusual,” Las Vegas Metropolitan Police Lt Michael Mauntel said of the frequency of the robberies since Nov. 2017.

LAS VEGAS — Bandits have gotten away with cash and chips from four casino-hotels in Las Vegas since last week, leaving police on the hunt for multiple suspects.

Three of the casinos targeted by criminals are on the Las Vegas Strip and the fourth one is in the vicinity. The string of incidents comes less than two months after a man wearing a wig and facial bandages robbed the poker room casino cashier of the Bellagio casino-hotel.

“It’s unusual,” Las Vegas Metropolitan Police Lt. Michael Mauntel said of the frequency of the robberies since November. “Absolutely, I am concerned that they are happening a little too often.”

A robbery happened Jan. 10, when a man displayed a handgun and demanded money from a cashier at the casino cage of the New York-New York. The same day, three people grabbed chips from a game table at Harrah’s. On Saturday, a man pointed a gun at a cashier at Ellis Island and demanded money. On Monday, a man jumped a counter at the SLS, grabbed cash and left the property in the northern end of the Strip.

Police do not believe the events are connected. Per policy, authorities do not release the amount of money or value of chips stolen, a move that in the past the department has justified arguing that it does not want to encourage other criminals to target the venues.

Security guards did not pursue the armed suspects, which Mehmet Erdem, an associate professor at the University of Nevada, Las Vegas, said has been a longstanding practice from casino operators.

He added that the companies also have to carefully balance the amount of visible security they have on their casino floors to make sure that it does not make customers uneasy.

“If you have armed security personnel, I’m looking at my risk management. How much money am I loosing from heists versus responsibility?” Erdem said.

He cited the case of a tourist who was killed in 2000 by a stray bullet at Harrah’s as security officers struggled with a robbery suspect who opened fire. The robbery suspect shot a guard in the stomach as officers tried to handcuff him and fired another round that went through a guard’s pant leg and into the back of the victim.

“Do you want to create incidents like that?” he said. “Unless you have Navy SEALs for your security personnel, and they are like Chuck Norris and Steven Seagal and can take out anybody, I think it is a huge risk to have security personnel be armed at least in a visible setting.”