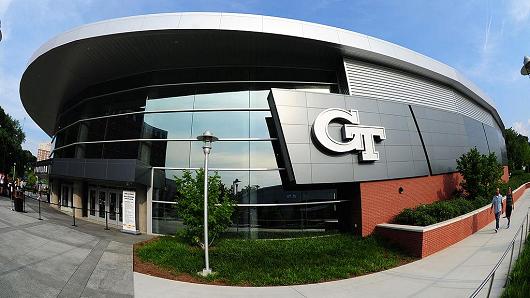 Today more than 6,300 students are enrolled at Georgia Tech to earn an online masters of science in computer science degree, with nearly 500 of them from AT&T.

“We knew the vision of Randall Stephenson when it came to retraining and that he gave huge weight to education,” said Galil. “He enabled us to get up to speed very fast.” Today more than 6,300 students are enrolled at Georgia Tech to earn an online masters of science in computer science degree, with nearly 500 of them from AT&T. The degree is identical in every way to one earned on-campus except for this: It costs less than $7,000, compared with around $42,000 when a student attends in person.

Nathaniel Meyer appreciates that feature. In December 2015 the married father of two young boys earned his online master’s in computer science at Georgia Tech, with the degree paid for by AT&T. He used his newfound training to move from a rapidly fading job in network operations in Charlotte, North Carolina, to a position as a data scientist in the company’s Plano, Texas, offices. Getting all the coursework and projects done on his own time, in addition to holding down his day job, was “difficult and challenging but in the end very rewarding,” Meyer said. “I’ve got everything that I want in a job now. I love my work, and it’s a really good fit for me.”

Blase said satisfied employees like Meyer and Bick aren’t just good PR. They give the company a real and substantial competitive edge. “If you’re a kid graduating with a master’s from Cal Tech and you see that AT&T is being recognized regularly for its commitment to employee development, that’s going to mean something,” he said.

“And when you have engaged employees, that leads to satisfied customers and increased profits for the company. Having a mantra of continuous learning is all part of that equation.”

— By Susan Caminiti, special to CNBC.com