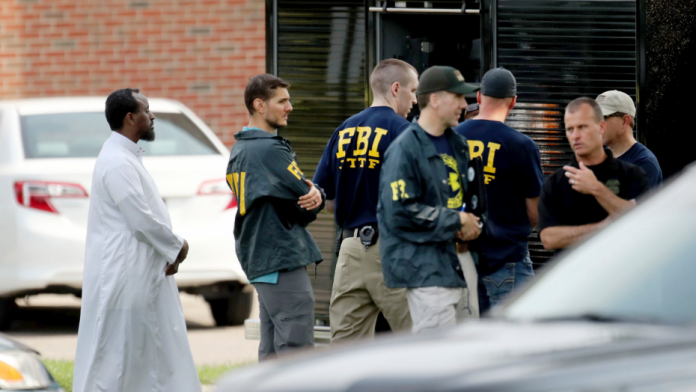 CHICAGO –  Why three men allegedly chose to travel some 500 miles (805 kilometers) from a rural farming community of less the 100 residents in central Illinois to bomb a particular mosque in suburban Minneapolis isn’t clear.

But a complaint released as they were charged Tuesday in the 2017 attack on the Dar Al-Farooq Islamic Center includes a chilling comment one suspect allegedly made about their desired effect: They hoped to scare Muslims into leaving the U.S.

Attention by investigators, as well as members of the Bloomington, Minnesota, mosque, now turns to the suspects’ affiliations and backgrounds and what else these might reveal about their motivations.

A statement from the U.S. attorney’s office in Springfield, Illinois, says the men also are suspected in the attempted bombing of an abortion clinic. The Dar Al-Farooq Islamic Center in Bloomington, Minnesota, was bombed just before morning prayers on Aug. 5, causing a fire and extensive damage although no one was injured or killed. And there was an attempted bombing of the Champaign, Illinois, Women’s Health Practice on Nov. 7.

One of the men, Michael B. Hari, 47, described in an April 2017 Chicago Tribune article how he drafted a $10 billion plan to build a wall along the border with Mexico, citing President Donald Trump’s call for such a wall. Hari drew up the proposal after launching a security company, Crisis Resolution Security Services, the newspaper said.

Hari also filed a federal lawsuit just last month in central Illinois, naming the U.S. secretaries of agriculture and health and human services as defendants. It accuses their departments of violating his constitutional rights by doing the food-safety certification work that his firm, Equicert, does.

“The People of the United States have rejected the Marxist doctrine that the government shall own the means of production,” he wrote, according to the court document. He requested a court order barring federal officials from interfering with his business.

The other two men charged in the mosque bombing with Hari were identified as Joe Morris, 22, and Michael McWhorter, 29. All three are from Clarence, a rural community of less than 100 residents some 35 miles (56 kilometers) north of Champaign-Urbana. A fourth man was charged with a gun offense, but he was not identified as a suspect in the bombing or attempted bombing.

A complaint said a tip in December led authorities to investigate the three men, after a person sent the local sheriff photos of guns and bomb-making material inside Hari’s parents’ home, where Hari often stayed. In January, a second informant told authorities that the three men had carried out the mosque bombing and the failed clinic bombing, according to the complaint.

McWhorter allegedly told an FBI agent during an interview that the three rented a pickup in Champaign and drove more than 500 miles (805 kilometers) to Minnesota with a plan to bomb the mosque, according to a criminal complaint. He said they wanted to let Muslims know they are not welcome in the United States and “scare them out of the country,” according to notes taken by the FBI.

It wasn’t clear from the complaint why the men may have targeted a mosque so far from Illinois.

Morris told one informant that Hari had promised to pay him and McWhorter $18,000 for participating in the mosque bombing, according to the complaint. An affidavit says the men broke a window to the imam’s office and threw a pipe bomb containing black powder into the mosque. The pipe bomb exploded, causing a fire that was extinguished by sprinklers.

A witness outside the mosque heard the sound of breaking glass and saw a man get into a dark pickup truck. The truck then sped away, the affidavit said.

Minneapolis FBI Acting Special Agent in Charge Robert Bone said authorities no longer believe there is any further threat to the community in connection with this incident.

McWhorter also allegedly admitted that the three men tried to bomb the abortion clinic on Nov. 7, again renting a truck to carry out the attack. McWhorter described a PVC pipe bomb and said Morris broke a window and threw it in, where it failed to go off, according to the complaint.

The complaint also said nothing about a possible motivation for the clinic attack.

Jaylani Hussein, executive director of the Minnesota chapter of the Muslim advocacy and civil liberties group Council on American-Islamic Relations, welcomed news of the arrests.

“This is definitely a relief that this case is finally to conclusion and those assailants-slash-suspects are apprehended and no longer a threat to our community,” Hussein said in a telephone interview Tuesday.

The Islamic Center primarily serves Somalis in the Minneapolis area and houses a mosque and religious school for children. Minnesota is home to the largest Somali community outside of east Africa, with an estimated 57,000 people, according to the most recent census estimates.

Mohamed Omar, the center’s executive director, said at the time that the mosque didn’t receive any threats beforehand or claims of responsibility afterward. The FBI had offered a $30,000 reward for information leading to a conviction in the bombing. It’s unclear if the reward money will be paid.

Officials said at the time that witnesses saw someone throw something from a truck or van before the blast and saw a vehicle speed away afterward. Mosque leaders later released security video from inside the mosque that caught the moments before the explosion, and some smoke and flying debris. The video didn’t show the blast itself.

Minnesota Gov. Mark Dayton called the bombing an act of terrorism when he and other officials visited the mosque the day after the explosion.

“That bombing that took place last summer was a tragedy for all Minnesotans,” U.S. Attorney Gregory Brooker said, adding that it remains a top priority for law enforcement.