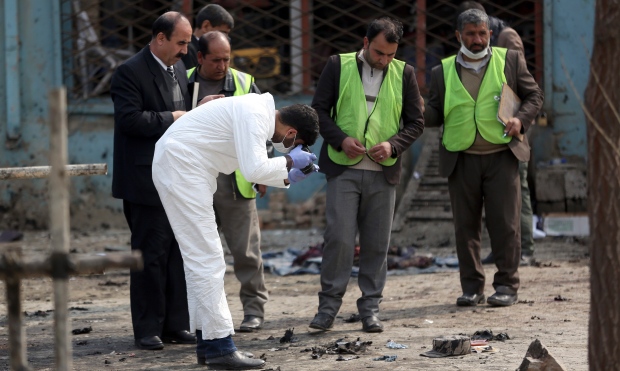 A suicide bomber targeting Afghanistan’s minority Hazaras blew himself up at a police checkpoint in western Kabul on Friday, killing nine people and wounding 18, officials said.

According to Basir Mujahid, spokesperson for the Kabul police chief, the bomber was on foot and was trying to strike a gathering of Hazaras who were commemorating the 1995 death of their leader, Abdul Ali Mazari, killed at the hands of the Taliban.

The bomber came as close to the gathering as he could and detonated his explosives at the checkpoint outside, the spokesperson said. One policeman was among the dead.

Local Hazara leader Mohammad Mohaqiq told the gathering that the explosion was an attempt to terrorize Afghans. He blamed the Taliban and Islamic State in Iraq and Syria (ISIS), both of which have targeted ethnic Hazaras in the past.

Most Hazaras are Shia Muslims, and Sunni militants consider all Shia heretics and urge followers to kill them.

The spokesperson for the Health Ministry, Wahid Majro, said several of the wounded were in critical condition and he feared the death toll could rise further.

In other developments, the Taliban launched a deadly assault overnight on an army outpost in a remote region of Afghanistan’s northern Takhar province, killing six soldiers and wounding five in a blistering hours-long attack, Defence Ministry spokesman Dawlat Waziri said.

Members of the local police who were sent to assist the soldiers were ambushed by the Taliban while on their way to the outpost in the remote district of Khwaja Ghar.

Taliban spokesperson Zabihullah Mujahid claimed responsibility late Thursday for the outpost assault and the police slayings. He claimed the Taliban had inflicted a far higher number of casualties but the insurgents often exaggerate their claims.

The report couldn’t be independently confirmed because of the remoteness of the area.