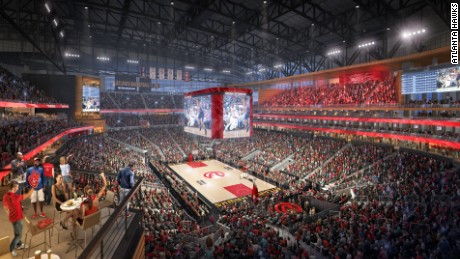 The franchise on Wednesday unveiled the details of the “transformation” of Philips Arena, the team’s venue since 1999. It’s the second-biggest redesign of an NBA arena, behind the recent remodeling of Madison Square Garden.

The Hawks will pay $50 million of the $192.5 million project cost, with the rest covered by the city of Atlanta, which owns the building that hosts approximately 170 events and nearly 2 million guests per year. Construction began June 20 and is due to finish during the 2018-2019 season, which marks the Hawks’ 50th anniversary in Atlanta.

“It’s so much more than a renovation,” Hawks COO Thad Sheely told CNN. “A renovation implies that we’re putting some paint on the walls, maybe you added a bathroom or two to your house. It doesn’t really denote to scale. We really are, with almost at $200 million, are going to be able to touch almost every thing and facing piece of the building.”

“Food has always been a passion of mine, from owning my own restaurant on Lake Oconee, to opening the Social Club,” Brown said. “I love what food does for friends and family, it gives us all something to gather around and a centerpiece for the time we spend together. I’m excited to open Zac Brown’s Social Club and to share it with all of Atlanta.”

Brown is known for his Eat and Greet events, where he invites some 150 fans to enjoy a Southern-style meal created by Hamlin and served from “Cookie,” a custom-built commercial kitchen on the 54-foot long, 18-wheeler that whisks the band around the country.

“We both know that a plate of food in front of someone makes more of an impression and memories than an autograph,” Hamlin, who lives in Atlanta, said to CNN. “This is why we started Eat and Greet back in the day on tour. Everything that we do is revolved around really taking care of our fans. Now, being able to do this at Philips Arena is just very, very cool and amazing for us because this is our community.”

Render, an Atlanta rapper, actor and Hawks fan since childhood, will bring his signature Graffitis SWAG Barbershops to Philips Arena. The name stands for “shaves, washes and grooming,” and the shop will have a view of the on-court action.

Render jumped at the opportunity, telling CNN, “This is definitely one of the highlights of my life.”

“After we calmly said yes, we hung up the phone and ran around the room and screamed like children,” he said. “We hope that this is just our first one in a major sports arena and not our last one.”

Topgolf simulators also will have a new home at the revamped arena, where the existing six-level wall of suites will be demolished and replaced with a new concourse, upper deck and conference center with new seating options and amenities.

Two suites will be equipped with the golf simulators, making Philips Arena the first sports-and-entertainment facility to offer the Topgolf Swing Suite technology. It is also is available at the Four Seasons Hotel in Houston.

The relationship with the Hawks is a natural fit, Ron Powers, president of the Topgolf Swing Suite social experience, told CNN. After visiting with Hawks’ executives, it was one of the easiest business decisions he ever made, he said.

“You ever had that first date where everything just felt right and you were dying not to go too far, too fast?” Powers said. “That’s the way it was with (Hawks CEO) Steve (Koonin) and I. I couldn’t wait to get back and put a deal together.”

First bar on an NBA floor

When the project is done, the arena will have 360-degree connectivity to go with new restaurants and bars — including the first bar on an NBA floor. The Hawks Bar, in the shape of the team’s iconic “Pac-Man” logo, will be just steps from the court.

“You literally will be 10 feet from the action while you’re having your cocktail and standing and talking with your friends,” Koonin said to CNN. “The day of sitting in your seat, eating your hot dog and having a beer are gone forever. It’s about socialization and a great night out.”

The new center-hung scoreboard will be more than three times the size of the old one. For concerts, there will be new dressing-room and backstage areas, as well as improved acoustics in the building.

The endeavor makes Philips Arena the third Atlanta pro sports venue in recent years to undergo a huge upgrade. Mercedes-Benz Stadium, home to the NFL’s Atlanta Falcons and MLS’s Atlanta United, is due to open later this year. The Atlanta Braves began playing this year at the new SunTrust Park.

Philips Arena was built in the late 1990s as a multipurpose facility for the Hawks and the NHL’s Thrashers, which played in Atlanta from 1999 to 2011. The latest project will update the design into a basketball-first facility.

Instead of building a new arena, which contractors estimated would cost $550 million, the Hawks committed to an 18-year lease extension, keeping them at Philips Arena through 2046.

The arena will close over the next two summers for renovation but is due to be open this October for the start of the Hawks’ 2017-2018 season.

HOK, the largest US-based architecture-engineering firm and the second-largest interior design firm, is the leading architect on the project.