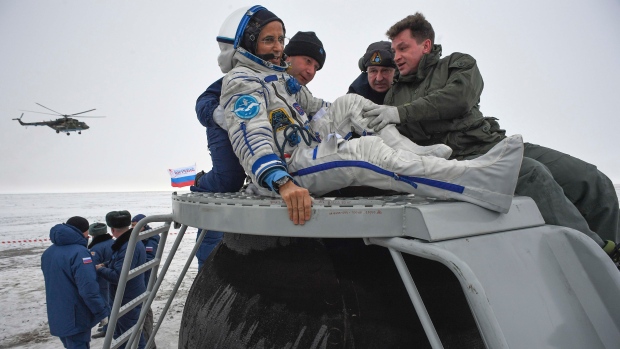 A capsule carrying two U.S. astronauts and a Russian cosmonaut from the International Space Station landed in snowy Kazakhstan on Wednesday after a five-and-a-half month mission, a NASA TV live broadcast showed.

The capsule landed in the snow covered steppe some 130 kilometres southeast of the central city of Zhezkazgan at 8.31 a.m. local time.

Misurkin was the first to emerge from the spacecraft, assisted by members of the Russian search and recovery team, and he was followed by Acaba who smiled and made a thumbs-up gesture.

The trio had spent five-and-a-half months at the ISS, a $100 billion US lab that flies about 400 km above Earth.

They are due to be replaced by NASA’s Andrew Feustel and Richard Arnold, and Oleg Artemyev of Roscosmos, whose spacecraft will blast off from the Baikonur cosmodrome, also in Kazakhstan, on March 21.