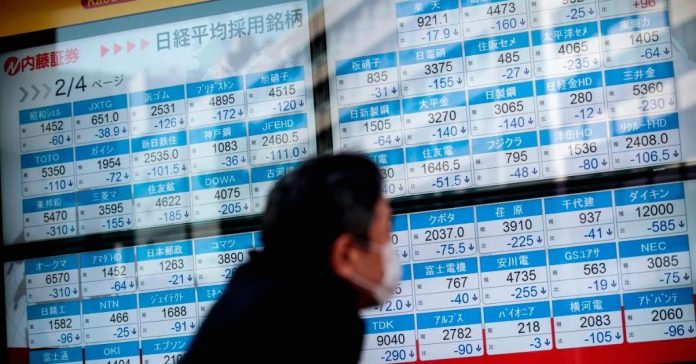 After notching a 1.07 percent gain in the previous session, the Nikkei 225 looked set to open lower on Wednesday. Nikkei futures traded in Chicago were down 0.83 percent at 22,205 compared to the index’s last close. Osaka futures traded lower by a similar level at 22,210.

Regional corporates due to report on Wednesday include Hong Kong Exchanges and Clearing, Hysan Development and Sino Land.

Markets in Taiwan will be closed for Peace Memorial Day.

The advance in regional markets had paused in the last session as mainland China markets closed lower. The Shanghai composite and blue-chip CSI 300 fell more than 1 percent although small cap stocks held up relatively well, with the ChiNext start-up board advancing 0.97 percent on Tuesday.

Those losses saw Hong Kong’s Hang Seng Index close down 229.94 points, or 0.73 percent, in the last session despite early gains.

In currencies, the dollar index, which tracks the U.S. currency against a basket of rivals, bounced to trade at 90.386 following Powell’s Tuesday testimony. Against the yen, the dollar firmed to trade at 107.34 by 7:00 a.m. HK/SIN.

Correspondingly, the Australian dollar fell in the last session as the dollar firmed. The Aussie dollar last traded at $0.7795, compared to levels around the $0.78 handle seen earlier in the week.