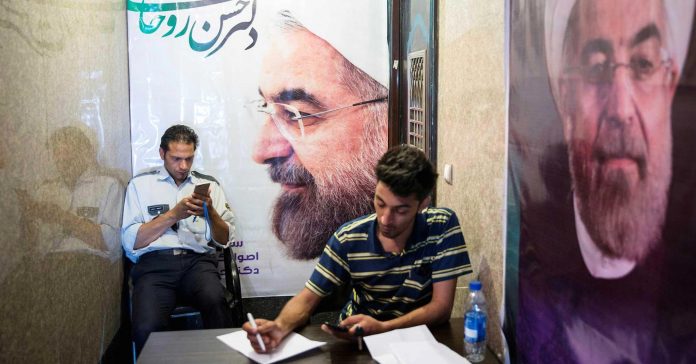 Mohsen Araki, a Shiite cleric who serves in Iran’s Assembly of Experts, praised Rouhani’s efforts at improving the economy. However, he said Rouhani needed to do more to challenge “enemy pressures.”

“We must go back to the pre-nuclear deal situation,” Araki said. “The enemy has not kept with its commitments.”

Ali Ahmadi, a pro-government demonstrator, blamed the U.S for all of Iran’s economic problems.

“They always say that we are supporting Iranian people, but who should pay the costs?” Ahmadi asked.

Iran’s economy has improved since the nuclear deal, which saw Iran limit its enrichment of uranium in exchange for the end of some of the international sanctions that crippled its economy. Tehran now sells its oil on the global market and has signed deals for tens of billions of dollars of Western aircraft.

That improvement has not reached the average Iranian, however. Unemployment remains high. Official inflation has crept up to 10 percent again. A recent increase in egg and poultry prices by as much as 40 percent, which a government spokesman has blamed on a cull over avian flu fears, appears to have been the spark for the economic protests.

While police have arrested some protesters, the country’s powerful Revolutionary Guard and its affiliates have not intervened as they have in other unauthorized demonstrations since the 2009 election. The economic protests initially just put pressure on Rouhani’s administration.

Early on Saturday, Trump tweeted out his support for the protests.

“Many reports of peaceful protests by Iranian citizens fed up with regime’s corruption & its squandering of the nation’s wealth to fund terrorism abroad,” he wrote. “Iranian govt should respect their people’s rights, including right to express themselves. The world is watching! #IranProtests.”