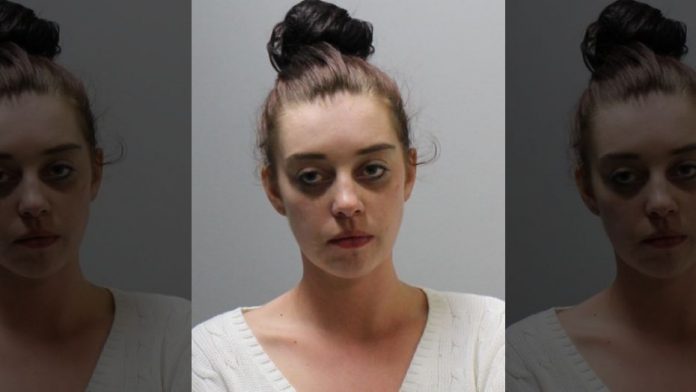 Police said Nicole Hunter, 25, tried to snort cocaine while waiting at the station following an arrest.

A “belligerent” and “uncooperative” Connecticut woman tried to snort cocaine inside a police station Monday while she was waiting to be searched by a female officer, according to a police report.

OUT OF THE WOODS: CONNECTICUT POLICE DOG FOUND SAFE AFTER 36 HOURS IN WILDERNESS

The report said police had been looking for a black Kia SUV with New Hampshire license plates following reports of an erratic driver. They found the car in Hunter’s driveway, with her still sitting inside of it, the report said.

Officers described her as “uncooperative” and said she “was screaming outside in a residential neighborhood.” They added in the report she “was belligerent and charged at the officers.”

Hunter was subsequently arrested and brought to the Ledyard Police Department. But while waiting to be searched by a female officer, police said Hunter “pulled a pink powdery substance wrapped in paper out of her pocket and unsuccessfully tried to snort the powdery substance.”

The material was later confirmed to be cocaine, the report said.

Hunter was charged with possession of narcotics, interfering with an officer and disorderly conduct, police said. She was released from custody on bond and is expected in appear in court on Jan. 8, 2018.