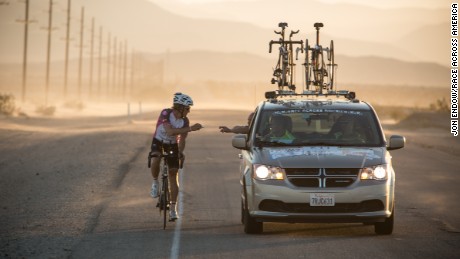 Just two-and-a-half weeks from the completion of his bid to cycle around the world, an elderly driver in Louisiana skipped a red light and hit Beaumont, sending him flying over the bonnet and onto the tarmac.

Luckily, Beaumont escaped serious injury, though he did have other issues to contend with.

“Her son arrives in a pickup truck; I explain that I’m riding for the world record, so my bike needs fixing,” Beaumont tells CNN in a lengthy interview. “So he drops me off at this place in town,”

“The problem was he dropped me off in one of the most dangerous parts of town. I got mugged and everything got stolen.”

Beaumont managed to get back on the road to seal the record of 194 days and 17 hours back in 2008, a record that has since been lowered to 123 days by New Zealander Andrew Nicholson.

Now the 34-year-old Scot is setting out on July 2 to cycle around the world … in 80 days, nearly two-and-a-half times quicker than his last attempt.

The time frame is a nod to Jules Vernes’ novel “Around the World in Eighty Days,” which tells the story of Londoner Phileas Fogg, who circumnavigated the globe in 80 days because of a £20,000 wager set by friends at The Reform Club.

Beaumont’s journey, known as the Artemis World Cycle, begins in Paris on July 2 and will take him 18,000 miles through 14 countries over four stages. He prepared for his Herculean task with a leisurely, 3,500 mile ride around Britain which set off on April 4.

“That training ride (was) really to gauge whether this is possible,” he says, “and we believe it is. I’m not riding Tour de France speeds, this is simply tempo riding.

“If I average 15mph (24kph) for four blocks of four hours every day, then that’s 240 miles and that should see me through.”

Read: How to cycle around the world

Beaumont is so positive in conversation that you cannot help but buy into the certainty the 80-day mark will be achieved.

Even so, he says he is the biggest doubter within his own team, who speak of when — not if — the feat is achieved.

Beaumont describes his first voyage around the world on two wheels as “wild-man riding.”

“I had to forage for food, (and) try to get water wherever I could,” he recalls. “That was a more maverick approach. This is very different, I have an entire team of people behind me now.”

Although Beaumont is confident that the same wild-man solo approach would allow him to beat Nicholson’s 123-day record — which was set over four months in 2015 — he admits that the 80-day mark can only be achieved with the support of the large team assembled for him.

His mother Una, who has worked on all his expeditions, will be in charge of base camp, while Beaumont will ride behind three alternating on-the-road leaders. A performance manager, a navigator, a logistics manager, and several bike mechanics will travel with the team, as well as a film crew following his every pedal.

Of the daunting quest ahead, he says: “I’m raring to go. I’ve trained for this for the last 22 years, since I was a 12-year-old kid cycling around Scotland. I’ve been around the world before and I’ve been properly building up to this for three years now.”

Beaumont came out of retirement after a job for the BBC took him around the world trailing the Queen’s Baton Relay for the 2014 Commonwealth Games. Inspired by stories from young athletes he crossed paths with across the planet, he set about on his new quest.

“This is physically and mentally possible,” he says. “The things you have to factor in are those you can’t control like borders (and) police, but we’ve assessed that risk and been in touch with people as much as possible to organize the logistics.

“We’ve set out to tackle the flattest and best paved route possible to give us the best possible chance,” he adds, clearly aware of the dangers involved. “This is all a very rational plan but I appreciate that this isn’t some marginal gain. This is another world altogether.”

On his last cycling venture to the base of Africa, Beaumont’s overriding concern was avoiding mosquitoes and road traffic accidents — unsurprising considering his previous scrapes — rather than more common fears like Ebola and terrorism.

‘Fight for our lives’

The incident in Louisiana hasn’t been Beaumont’s only brush with mortality. He faced an even scarier moment during an attempt to row across the Atlantic with a crew.

“We were 500 miles from the finish with a team of six and going for the world record,” he recalls. “We were set to finish in four or five days, we got hit by a wave. The boat capsized and never righted itself. That left us in a fight for our lives.”

It was 14 hours before they were rescued: “Our lives were anything but certain, as we were floating about in high winds and waves. Along with one other crew member, I left the raft after an hour to try to salvage things under the boat.”

Disorientated, the first thing he brought to the surface was the fire extinguisher — “that wasn’t much use,” he admits — before grabbing more useful items like satellite phones and flares to attract attention.

“It’s odd in that situation: You either panic or go into analytical mode,” he explains. “I went for the latter. My brain clicked into ‘How am I going to survive this?’ From that point, I was just so focused on saving my life.”

Eventually, the crew were picked up by a Taiwanese trawler.

Understandably, Beaumont has abandoned water in favor of terra firma for his latest, and perhaps toughest, challenge of all.