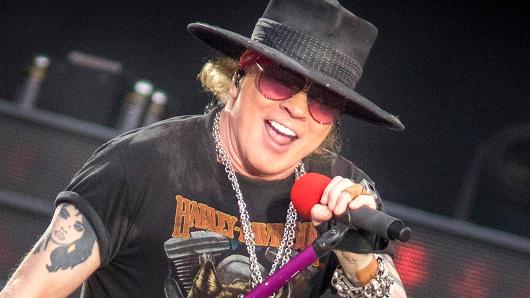 Axl Rose of Guns N’ Roses performs onstage during the ‘Not In This Lifetime’ Tour at TD Place Stadium on August 21, 2017 in Ottawa, Canada.

Rose tweeted that Cook is “the Donald Trump of the music industry.” That’s likely not a compliment for iTunes-owner Apple.

Tweet: Tim Cook is the Donald Trump of the music industry.

Rose has been a vocal critic of the president and his deputies Ivanka Trump, Jeff Sessions and Vice President Mike Pence. (During Trump’s campaign the rock band had a pinata of Trump at a concert, according to Billboard, and guitarist Duff McKagan has been known to write political commentary.)

Cook himself has not been supportive of all of Trump’s policies — Cook openly condemned Trump’s decisions to withdraw from the Paris climate agreement and to tighten immigration from Muslim-majority countries.

But Apple has been a big beneficiary of U.S. tax reform, championed by the Trump administration. It’s not clear if there’s a connection, but Rose would not be the first to point out a connection between Apple’s wealth and its efforts (or lack thereof) to pay musicians. Kanye West also addressed Cook a few years back, saying, “Hey, Tim Cook, the Head of Apple, stop trying to get performers to play your festivals for free. You are rich.”

Tweet: Apple will always make sure that artist are paid #iTunes #AppleMusic