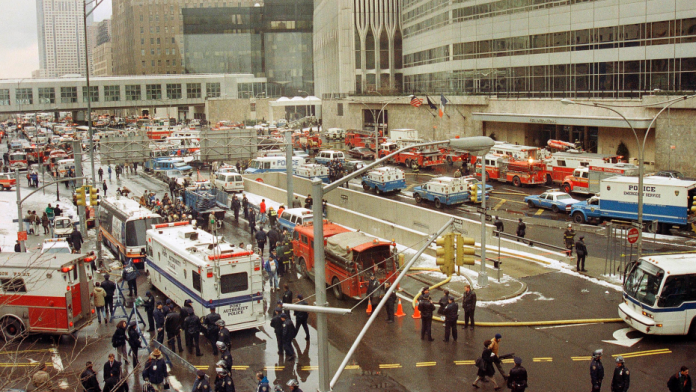 EDITOR’S NOTE — On Feb. 26, 1993, a group of Islamic terrorists drove a rented van into the underground parking garage at the World Trade Center and set off a 1,200 pound bomb in a failed attempt to collapse the twin towers. The blast didn’t cause the destruction its planners intended. But it opened up a multi-story crater in the building, injured more than 1,000 people and ultimately killed six. In the immediate aftermath of the attack, investigators didn’t know much about who might be responsible. Early on, officials speculated that the attack was related to the ongoing civil war in the former Yugoslavia. In the coming months, though, they identified a cell of Middle Eastern terrorists responsible for the attack. Seven men were ultimately identified as suspects. One is still at large. Six were captured and convicted, including alleged lead planner Ramzi Yousef. His uncle, Khalid Sheikh Mohammed, was later labeled by U.S. authorities as the chief architect of the Sept. 11 attacks that destroyed the towers in 2001.

The Associated Press is republishing a version of its report on the bombing to mark the 25th anniversary of the 1993 bombing.

A pregnant woman was plucked off the roof of one of the two towers by a helicopter. About 200 kindergartners and elementary school children were stranded for hours on the observation deck. Other people were trapped in elevators, or in rubble in the garage and a train station beneath it.

Hundreds poured out of the towers into the streets of lower Manhattan, gasping, their faces black with soot, after groping their way from as high as the 105th floor. Others on upper floors stayed put to await help, and broke windows as the smoke reached them.

Eight disabled people were trapped for nine hours on the 94th floor before they were taken to the roof and removed by helicopter, the last people out of the building, the Port Authority said. In all, 23 people were rescued from the towers by helicopter.

The towers, the world’s second-largest buildings, shuddered with the noontime explosion. Thick black smoke billowed in minutes to the top of both buildings, where some 130,000 people work or visit each day.

A terrorist task force of federal and city investigators believed that a car bomb caused the blast, James Fox, an assistant director of the FBI who heads its New York office, told The New York Times. He said no bomb fragments had been found.

After the blast, authorities received at least nine telephone calls claiming responsibility, said Jack Killorin, spokesman for the Bureau of Alcohol, Tobacco and Firearms in Washington.

Asked whether a bomb was used, he said, “There was nothing that we saw that would rule out a bombing.” He also wouldn’t rule out an accidental blast.

Gov. Mario Cuomo, in a telephone interview on the “Larry King Live” television show, said it has “been established that it was a bomb placed on the floor of the parking garage.”

One source told The Associated Press that one group, claiming to represent Croatian militants, called 15 minutes before the blast. A second source, a police officer at the scene who like the first spoke on condition of anonymity, said a “massive bomb” was responsible.

Security was strengthened at all area airports, said Eric Hedrick of the Port Authority, which runs the trade center and the airports. Police also tightened security in Washington, D.C.

Hours after the blast, police evacuated the Empire State Building uptown because of a bomb threat. People were allowed back in during the evening.

The blast brought down the steel-and-concrete ceiling of the underground Port Authority-Trans Hudson train station, a major transportation point for New Jersey commuters. A 180-foot hole was ripped in a station wall. Rescuers said nobody remained trapped in that rubble, but nine hours after the blast they still were searching through the collapsed garage above the station.

The explosion damaged a fleet of Secret Service cars in the garage, including an armored limousine used by foreign dignitaries but not by the president, the agency said.

A fire burned for about two hours after the blast, creating acrid smoke.

The Emergency Medical Service initially reported seven deaths, including four Port Authority employees, but a spokeswoman, Blanca Delgato, later said she could not confirm that number. Police reported five dead. Some 600 people were injured, with 400 of them requiring hospitalization. The injured included 31 firefighters and 3 police officers. Most of the injured suffered smoke inhalation.

“I’m just glad to be alive,” said Carlease Lee Price, who was teaching an accounting class on the 94th floor. “We felt the tremor. It was like being in an earthquake.”

Robert Ashley was waiting for a train when he was bashed by debris in the station. “I don’t know how I made it,” Ashley said as he was carried out into the cold on a stretcher.

Alan Walker was in an elevator on the ground floor when the explosion struck, blowing out a panel that knocked him over. “It was scary as hell,” he said. “There was smoke everywhere.”

“It felt like a big boom,” said Lisa Hoffman, who works at the nearby World Financial Center. “The building shook. I looked out the window to see if New Jersey had disappeared.”

Electricity and heat was cut off to the entire Trade Center complex, leaving people trapped by thick smoke. Some people walked down from as high as the 105th floor – or spent hours stuck in elevators.

Pupils from three schools, including 120 kindergartners, were trapped for several hours on the 107th floor observation deck before police walked them down to safety, Board of Education spokesman Frank Sobrino said.

On the 49th floor, Port Authority Executive Director Stanley Brezenoff was stuck with about 300 other people. After walking down 17 flights of stairs from his office, Brezenoff was halted by smoke.

“As we got further down, the smoke got thicker. It got very, very thick,” said Brezenoff, who spent several hours upstairs.

Others trapped inside the building moistened towels and fabrics to wear over their faces against the smoke.

The fire caused limited damage to some over-the-counter market computers at downtown brokerages and led to the early closing of the New York Mercantile Exchange and the Commodity Exchange at the complex. Some local television service and other communications, including a center serving The Associated Press, also were disrupted.

The twin towers near the southern tip of Manhattan were the world’s tallest buildings when dedicated in 1973, but since have been surpassed by Chicago’s Sears Tower.