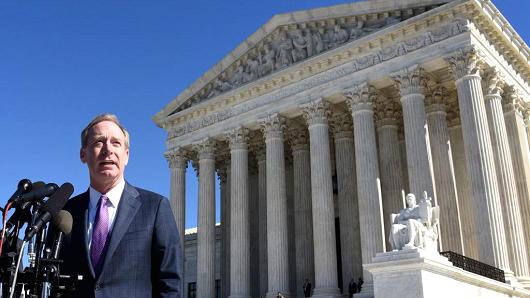 Brad Smith, President and Chief Legal Officer of Microsoft in front of the Supreme Court in Washington, DC, on February 27, 2018.

This case is also being closely watched by other countries wrestling with similar concerns, including members of the European Union. This case comes as tech firms increasingly store data remotely, and pits the need to safeguard customer data against the demands of law enforcement in obtaining information crucial to investigations.

It began when Microsoft took issue at handing over a criminal suspect’s emails stored in Microsoft computer servers in Dublin in a drug trafficking case, with the tech giant challenging whether a domestic warrant covered data stored abroad.

But Tokson is of the opinion that the ruling, however it turns out, may not lead to “drastic changes” domestically, at least.

“In fact, one of the arguments in the government’s favour in this case is that, this is already what you can do with a subpoena in most cases. If you subpoena Microsoft in the U.S., you can ask them for data or files stored overseas,” he said.