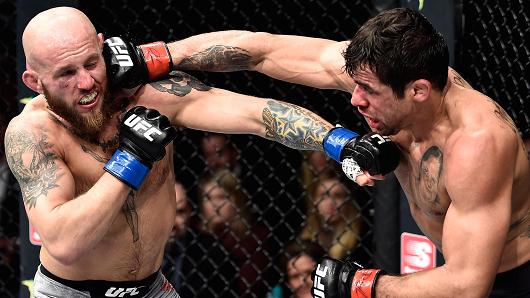 Renan Barao of Brazil punches Brian Kelleher in their bantamweight bout during the UFC Fight Night event at Amway Center on February 24, 2018 in Orlando, Florida.

Amazon is taking another step closer to parity with the big cable providers: It inked a new deal with UFC to sell pay-per-view packages for the organization’s upcoming slate of weekend fights.

That means you’ll be able to buy UFC fights, including Saturday’s UFC 222, directly through Amazon, and you won’t need to pay through an existing relationship with cable or satellite providers, like Comcast or Dish Network, or watch on a cable channel, like Fox Sports 1. You won’t need an Amazon Prime account to watch, either — it’ll just cost you $64.99, and you’ll be able to watch it on all the same devices where you can watch Amazon Prime videos.

Read more from Recode:
The media merger wars are on. Next up: Comcast’s bid to undercut Disney’s purchase of Fox
Uber’s culture fixer, Frances Frei, is leaving the company
Ford is setting up for an autonomous ride-hail and delivery business in Miami

Amazon is far from the only place you can watch the fight, but it’s a notable deal for a couple reasons:

Amazon declined to discuss deal terms for the UFC arrangement, though it’s likely Amazon will get the same cut that cable providers normally get in these kinds of deals. When boxer Floyd Mayweather faced off against Manny Pacquiao a few years ago, for example, the cable providers took in around 30 percent to 40 percent of the subscription revenue, according to the New York Times. That wasn’t a UFC fight, but these UFC deals work in much the same way.

Saturday’s UFC 222 is on sale through Amazon beginning Wednesday.