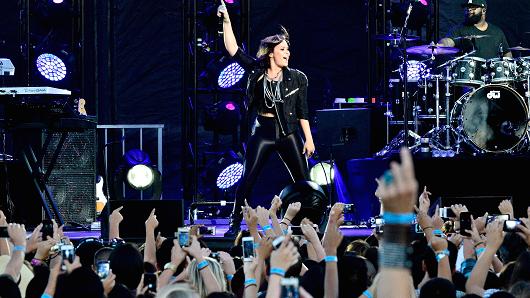 Amazon is seeking to partner with U.S. venue owners to sell event tickets, four sources have told Reuters, a move that could loosen Ticketmaster’s powerful grip on the lucrative ticketing business.

Shares of Live Nation were up about 5 percent following the report. Amazon shares were down 2.5%

If Amazon moves ahead, it would represent the latest attempt by the world’s largest online retailer to use its massive customer base, tech savvy and bargaining power to shake up a big market.

The Seattle-based company sees the U.S. ticketing market as ripe for attack. Consumers dislike ticket fees, and venue owners, sports leagues and teams want more distributors for their tickets as they seek to boost sales.

Access to tickets could be another means to lure members to the Amazon Prime shopping club. For music acts and sports teams, selling tickets through Amazon could help sell their merchandise.

Currently Ticketmaster, owned by Live Nation, is the exclusive seller of primary tickets for many top venues in the United States. Would-be challengers have struggled to compete in the face of Ticketmaster’s strong relationships with the operators of major U.S. sports stadiums, arenas, concert halls and other venues.

Amazon has had success with ticketing in Britain, where it has been selling seats to West End shows since 2015, even outselling Ticketmaster for some events, according to one of the sources, who owns venues in that country. It is less common for venues in Britain to have an exclusive ticket provider.