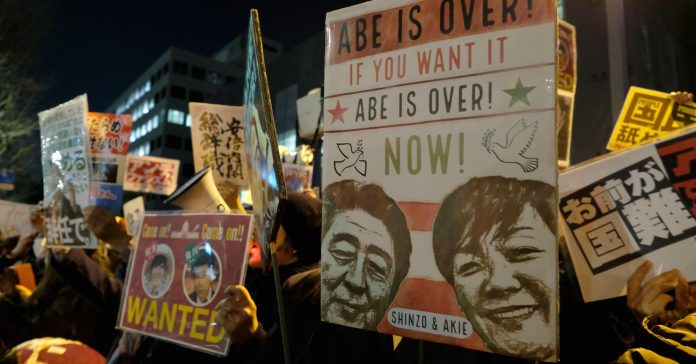 Up until now, “there was little appetite within the LDP to change leaders,” but with “evidence of serious wrongdoing” on the part of the finance ministry, “questions about who ordered the cover-up, how politicians were involved and what Abe knew will only grow,” Harris explained.

Support for Abe’s cabinet dropped two points to 44 percent, according to a telephone survey conducted by broadcaster NHK over the weekend. A separate poll by newspaper Yomiuri Shimbun showed the cabinet’s rating falling six percentage points to 48 percent. It was the first time that metric had fallen below 50 percent since October.

At the heart of the controversy are reports that Moritomo Gakuen, a private educational institute with an ultra-nationalist reputation, used its connections with Abe’s wife to obtain a cheap price for state land. Moritomo planned to use the land for a new school, naming Akie honorary principal. She quickly resigned from the position, however, when news of the deal broke last year.

If the government’s approval ratings fall further, Abe “may either not run or face defeat in the upcoming LDP leadership election,” echoed Marcel Thieliant, senior Japan economist at Capital Economics.

That could spell trouble for the prime minister’s “Abenomics” reform program that has helped revived the world’s third-largest economy.