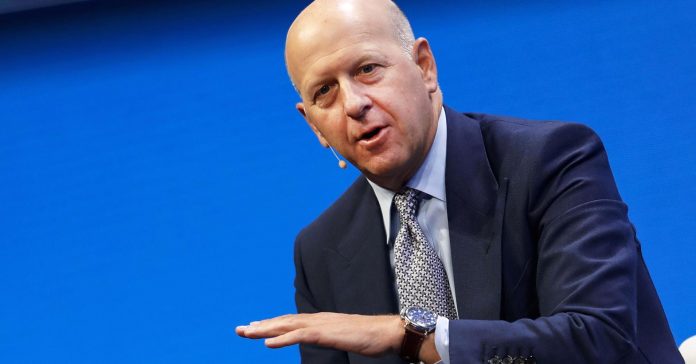 Solomon, who is turning 56 this year, worked in junk bonds at Bear Stearns before joining Goldman as a partner in 1999, right before the firm’s initial public offering. He was global head of the financing group at the bank before becoming co-head of the investment banking division from July 2006 to December 2016.

Solomon and Schwartz were named co-chief operating officers and presidents in December 2016, following the departure of then-COO Gary Cohn to the Trump administration. Cohn said Tuesday he is resigning from his role as chief economic advisor to the White House.

Cohn’s departure from the bank came as Blankfein was on his way to his 11th year as CEO. Blankfein joined Goldman in 2006 and once joked he would die at his desk there. But the bank’s once-mighty trading desks have struggled to return to their peak in 2009, when revenue from the business reached $33 billion.

Last year, Schwartz and Solomon presented a joint plan to move the bank forward and generate $5 billion in additional revenue, with a vision to boost lending and open for business in new locations such as Seattle and Atlanta.

Solomon has several pursuits outside of the Wall Street bank. He serves on the board of The Robin Hood Foundation, a nonprofit for fighting poverty in New York City. Solomon is also a member of the board of trustees at Hamilton College, from which he graduated in 1984 with a degree in government.

His hobbies of being a disc jockey and collecting fine wine have also made headlines in the last year.

In 2015 Solomon told Hamilton students that they should do something exciting as soon as possible, rather than take uninteresting jobs in the hope they will become interesting.

“David’s always believed that having a wide range of outside interests leads to a balanced life and makes for a better career,” Jake Siewert, a Goldman spokesman, said in a New York Times report in July 2017. “He’s preached that regularly to younger employees in the firm and tries to lead by example.”

The Goldman executive has performed regularly as a disk jockey in New York, Miami and the Bahamas, the Times said, citing posts on his now-private Instagram account. Solomon also led a study about improving the quality of life for Goldman’s junior bankers, resulting in new limits on weekend working hours, the report said.

Solomon also spends some of his free time perusing fine food and wine. Southern-style Root & Bone and Italian American Carbone were some of his top restaurant picks that he shared with Bloomberg last year.

As for wine, Solomon’s private collection is so extensive that his former personal assistant was accused of stealing $1.2 million worth of wine from it, according to an indictment unsealed in January. The document didn’t name the executive, but Goldman confirmed Solomon’s identity to media and said the theft was discovered in the fall of 2016.

Seven of the stolen bottles came from the French estate Domaine de la Romanee-Conti, or DRC, which prosecutors say is considered among the best, most expensive and rarest wine in the world.