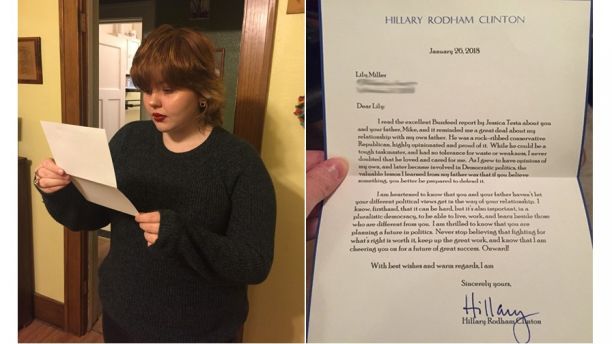 WATERLOO, Iowa –  When a small white envelope arrived at Lily Miller’s Iowa home last month, the 17-year-old girl dismissed it as part of a barrage of college recruitment mail and nearly threw it away.

But it turns out the letter came from Hillary Clinton, who’d read a recent news article about Lily and her father that resonated strongly with the former presidential candidate.

Lily is an ardent supporter of the Democratic Party. Her father, Mike, voted for Donald Trump. The two Iowans don’t agree on anything politically — a deep, cross-generational divide of the sort found in home after home across the nation. Still, they manage to love and respect each other despite their differences.

Those differences, and the way father and daughter have navigated them so deftly, compelled Clinton to write.

“I am heartened to know that you and your father haven’t let your different political views get in the way of your relationship,” wrote Clinton, whose own dad was a Republican. “I know, firsthand, that it can be hard, but it’s also important, in a pluralistic democracy, to be able to live, work and learn beside those who are different from you.”

Clinton also encouraged Lily’s dream of running for office. “I am thrilled to know that you are planning a future in politics … know that I am cheering you on for a future of great success,” she wrote.

To Lily, the letter was inspiring. Her father was less enthused, though he later acknowledged it was a meaningful message that “hit home” for him, too.

“I don’t think she realizes how much of an impact that letter had on me,” Lily said about Clinton as she ate a slice of pizza in the food court of the Crossroads Center shopping mall in Waterloo on a snowy February afternoon.

Lily and her 49-year-old father represent a generational and political split that’s become all too common in American homes one year into Trump’s tumultuous presidency. For many, the issues surrounding the 2016 election were far from politics as usual — with family members questioning each other’s morality on topics ranging from immigration to women’s reproductive rights to the Second Amendment.

Feb. 3: Lily Miller, 17, reads a letter from Hillary Clinton in which the former presidential candidate encouraged her dream of running for office one day.

A Fox News poll conducted in January found that 74 percent of American voters are “extremely” or “very” concerned about political divisions in the country. In October, a Washington Post-University of Maryland poll found that seven in 10 Americans said the nation’s political disagreements are at least as big as those that existed during the Vietnam War.

In the Miller household, such political discord is only intensified by Lily’s future career goals. The high school honor student – passionate about social justice – is plotting a run for office one day, but her father says he won’t vote for her.

“I would help her get to that office minus my vote,” Mike said during an interview at the family’s home. “I love her and I would support her. But if our political views don’t align, I won’t vote for her.”

The feeling appears to be mutual.

“If my dad were running for office, I honestly don’t know if I would vote for him,” Lily said. “I would have to see where he was coming from – his different ideas on things, how he would change things.”

Lily and Mike – separated by age and gender – differ sharply in their lists of important issues facing the nation. Lily is preoccupied with immigration, while her father, who works 12-hour days at the John Deere Factory to support his four children, is focused on the economy.

Among Lily’s concerns is former President Obama’s Deferred Action for Childhood Arrivals program, or DACA, which Trump said he plans to phase out – a move currently being challenged in the courts. The program provides a level of amnesty to certain undocumented immigrants who came to the U.S. as children.

“To me, the idea that a child who has never been to a country where they’re from could be deported to that country doesn’t make a lot of sense to me,” she said.

“They may not be here legally, but I strongly believe they’re a building block in this country,” said Lily, who volunteered for Clinton’s campaign by door-knocking in predominantly Bosnian neighborhoods in Waterloo where few people speak English.

“The fact that there are people who are out there and they’re contributing to the community and there are still people who are saying: ‘Sorry. You’re not a real American’ … That’s heartbreaking to me,” she said.

Unlike his daughter’s, Mike’s attention is fixed on the nation’s economic fortunes. He said he voted for Trump in part because he believed the businessman and “political outsider” could revive it.

“Donald Trump was best suited to help the economy because he is a billionaire,” he said.

“Somebody at work pointed out, ‘Yeah, but he’s gone bankrupt three times,'” Mike said. “Well, each time he came back a billionaire.”

Sitting side by side on a couch in the family’s living room, father and daughter spar on nearly every topic except gay marriage, which they both support.

Lily says she misses Obama. Mike thinks he “could have done better.” Lily describes the Second Amendment as “commonly misunderstood,” while Mike calls the right to bear arms important.

Then there’s Trump’s proposed border wall; Lily shakes her head and asks, “Why?” Mike, in contrast, doesn’t hesitate to say he supports it.

Despite their fierce political opposition, Lily and Mike are remarkably close. The two reconcile differences, they said, by choosing to value their father-daughter relationship above all else. At their core, the Millers believe people are more than politics, their characters not solely defined by it.

“He’s my dad. I’ll only ever have one dad. I think letting something as simple as a political disagreement get in the way of that would be foolish,” said Lily. “It would be selfish of me to turn my back on my dad after all he’s done – all the opportunities he’s given me.”

To Mike, the feeling is mutual. “My relationship with my daughter means the world to me. You need to love each other while you can.”