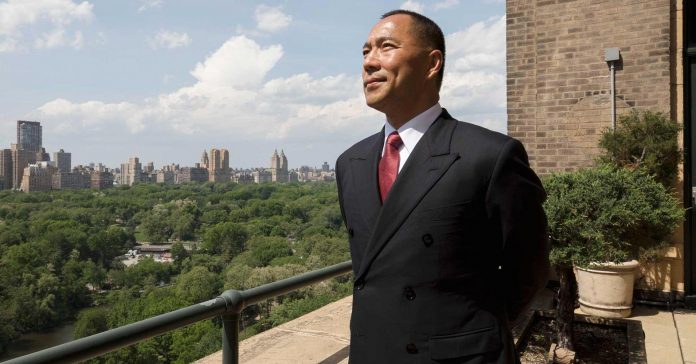 Away from his homeland, Mr. Guo still enjoys the high life. On Twitter, where his profile page portrays him as a male version of the Mockingjay from the “Hunger Games” series, he showed off his new private Airbus jet. When giving a tour of his 18th-floor New York apartment — shared with a bichon frisé puppy — he pointed out the Lalique crystal chandelier, Louis XVI furniture and an ancient Chinese watercolor painting. The monthly maintenance fees alone for the apartment are $58,000.

Mr. Guo boasts of multiple residences around the world, including in Beijing, London, Tokyo, Abu Dhabi and Hong Kong. His oceanside home there, with sweeping views of Repulse Bay, sits on two lots that Mr. Guo’s son bought for 880 million Hong Kong dollars ($113 million) in 2011, according to property records.

His lakeside property in Beijing is modeled on a traditional one-story courtyard home but is far more elaborate, with multiple levels, a cavernous closet with hundreds of identical suits, and a pool, in a complex of more than 86,000 square feet. One real estate agent in Beijing estimated its value at about $230 million.

Mr. Guo took Mr. Kirby, then a Harvard dean, on a two-hour tour of the property in 2004. The group was ushered into a private theater, the lights dimmed, and Johann Strauss Sr.’s “Radetzky March” began to play as Mr. Guo made a videotaped introduction to a development he planned near the site of the 2008 Olympic Games in Beijing. He and a Beijing vice mayor then asked Harvard to locate a campus on the complex, Mr. Kirby recalled.

At dinner, he pressed his case, all the while watching a Chinese soap opera on a tiny television screen. “It was, still to this day, the most bizarre evening I have ever spent in China,” Mr. Kirby said. (Harvard did not take Mr. Guo up on his offer.)

Mr. Guo says the motivation for his corruption allegations is simple: He claims the state shot one of his brothers in 1989 and he has been plotting his revenge ever since. The circumstances of the death are murky, though, like much of Mr. Guo’s story.

Mr. Guo says that during the 1989 Tiananmen student protests, he was arrested for giving money to the student movement and jailed for two years. But an overseas Chinese website, citing court documents, says that Mr. Guo had been arrested in a fraud involving oil sales and that his brother was killed when he and Mr. Guo attacked police officers.

He says he was born in May 1970, one of 10 boys in a family with ties to the Chinese Army from a small town in eastern China’s Shandong Province. (Legal documents say he was born in February 1967.) In prison, Mr. Guo, who has only a middle-school education, learned about Chinese history and other topics from educated inmates, he said.

After his release in 1991, Mr. Guo met a prominent businesswoman who introduced him to wealthy investors. Soon after he built a hotel in the central Chinese city of Zhengzhou, which became a meeting spot for government officials.

Those contacts and relationships with other officials, including Mr. Ma, the spy chief, helped Mr. Guo build his empire. He expanded into finance, acquiring a large stake in a securities brokerage firm. In 2014, the Hurun Report, which tracks the fortunes of China’s elite, estimated his wealth at $2.3 billion. But that same year, Mr. Guo’s ambition to take control of one of China’s biggest brokerage firms fell apart and he had a dispute with his business partner, who was later jailed.

Since then, he has lived abroad and his assets in China — he claims 120 billion renminbi ($17.4 billion) in all — have been frozen. Mr. Guo is facing financial pressures.

One hedge fund in Hong Kong, the Pacific Alliance Asia Opportunity Fund, recently sued him in New York, saying that he owes $88 million, a sum that includes millions of dollars in interest in loans from 2008. The fund wants to seize his New York apartment.

Last year, he sued the Swiss bank UBS, arguing that he was misled in a series of transactions that resulted in a $500 million loss for him, but the suit was dismissed. Caixin published an article last week saying that Mr. Blair had introduced Mr. Guo to Abu Dhabi’s crown prince. Mr. Guo later used money from Abu Dhabi to finance a failed takeover of a Chinese securities firm, which resulted in the loss, Caixin reported.

A representative for Mr. Blair did not address whether Mr. Blair had made introductions for Mr. Guo. Mr. Guo said the article was groundless.

One claim Mr. Guo made in March regarding the hidden wealth of a prominent Chinese family could be substantiated by company documents, The Times reported in April. Going after Mr. Wang, though, is particularly risky.

Mr. Wang, 68, has a reputation for being a problem solver who has worked closely with American executives, including Henry M. Paulson, the former chief executive of Goldman Sachs and Treasury secretary. His many protégés are in influential positions throughout China’s government.

Mr. Wang did not respond to faxed questions sent to the Central Commission for Discipline Inspection in Beijing.

“Wang Qishan has been the model of clean and competent, and all but untouchable,” said William Zarit, the chairman of the American Chamber of Commerce in China. “Should his star fall, business and government players should be concerned about their own safety.”

There’s no sign that Mr. Guo is letting up. Before the Communist Party meets this fall to pick a slate of top leaders, Mr. Guo plans his most dramatic assault of all: a live event, perhaps from Lincoln Center, that will focus on Chinese corruption.

“I want it to be carnival-style with a big screen,” he said. “We will sing. We will cry and we will talk about the world.”