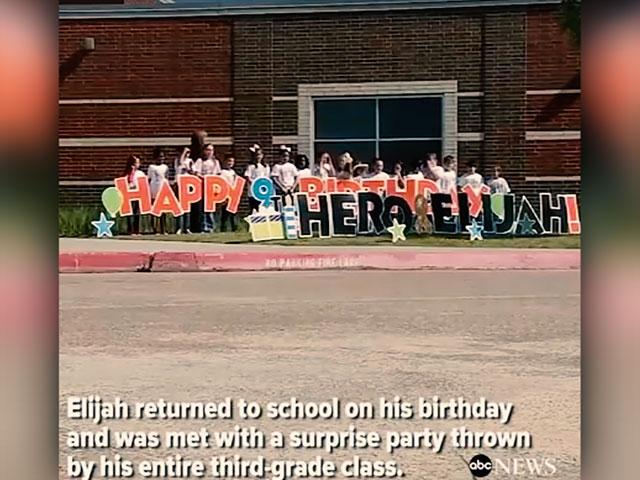 Classmates of a third-grader battling leukemia celebrated his birthday recently with a massive show of love and support.

Elijah Lewis of Babylon, Texas, has been unable to leave his house since he was diagnosed in January.

His biggest birthday wish was to visit his classmates — whom he hadn’t seen since his diagnosis — at school for a day.

His entire third-grade class at Victoria Walker Elementary surprised him with a birthday party, complete with presents and cake. They even wore T-Shirts that said “Lewis Strong.”

Lewis had no idea that there would be a party for him, and was overwhelmed with gratitude.

According to Lakesha Lewis, Elijah’s mother, it was “the best birthday ever.”

In a video that captures the moment, students are hugging Lewis, some crying.

“He’s wanted to see his friends since the day he found out he wasn’t able to come to school,” Lakesha Lewis told ABC News. “Since he was a baby, he always was excited about going to ‘big school,'” she said. “I think he likes just being able to interact with friends … He’s always been that kid that always wanted to go. Perfect attendance, never missed a day.”

“I wish it was a moment that we could’ve frozen and stayed in forever,” she added. “They made his day.”

“We were thrilled that Elijah was able to celebrate his birthday with his classmates and friends,” said a Victoria Walker Elementary spokeswoman. “The entire Goose Creek CISD family wishes him a speedy recovery, and we look forward to having him return to school as soon as he is able to do so.”