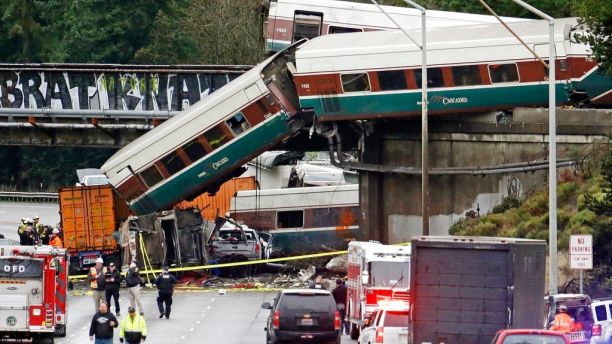 Whimpering in pain, bleeding from head injuries and dazed by the enormity of the crash, victims in the Amtrak train derailment south of Seattle begged 911 dispatchers for help and said “tons of people” had been hurt.

Dozens of emergency recordings released Wednesday by South Sound 911 Dispatch provided a vivid account of what happened during the deadly Dec. 18 crash.

“My abdomen hurts really bad. I don’t feel good,” said a crying woman identified as Angela who was bleeding from her head and wailed in panic each time she couldn’t find an answer to a dispatcher’s questions. “I don’t know how old I am off the top of my head. I’m sorry!”

Angela was in Car 5 with her 14-year-old son as the passenger train barreled through a curve at 78 mph (126 kph) in a 30 mph zone, derailing along both sides of the tracks and toppling some cars onto Interstate 5 below.

Angela begged for help and ordered her bleeding son to lie still because he had neck and back pain. He took a hit to his face. They got slammed into a table. She couldn’t find her shoes.

“Everybody’s getting off but I’m afraid to move my son,” Angela said, adding that “tons of people are hurt!”

Authorities say it could take more than a year to understand how the inaugural run of the train carrying 85 passengers and crew members ended in disaster along a new 15-mile (24-kilometer) bypass route.

Authorities say it could take more than a year to understand how the train carrying 85 passengers and crew members could have ended in disaster as it made its inaugural run along a fast, new 15-mile pass route.

One man called seeking information about his wife after learning she hit her head while on the train. He said he was driving to the scene, but the dispatcher urged him to avoid the area so he didn’t get stuck on the road.

The man replied: “I’m not going to be able to not (go). He added: “I apologize for being a bit of a mess and in a panic.”

On the ground, a woman identified as Aura MacArthur said she was driving south on Interstate 5 and thought her car had been hit by a mudslide.

“A huge cloud of mud and dirt came and hit my car and spun me around,” she said, cold and crying in her glass-strewn SUV.

“I am the only car besides a semi that made it through the train derailment. I was right at the front when it came,” she said, at times gasping for air and weeping.

“My chest is sore but my airbag’s deployed … I can’t go anywhere,” she said.

She said it was dark and no cars could pass because the road was blocked by the wreckage.

“I hope everybody’s OK,” she said.