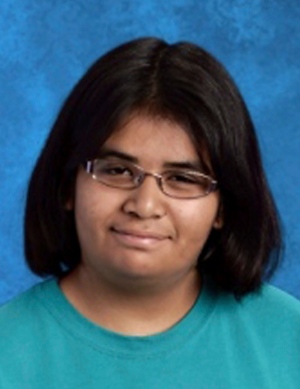 By the time Paul Brunner rolled up in his ambulance to the worst mass shooting in Texas history, the First Baptist Church was a chaotic triage scene. Parents cried and kids screamed, and nearly all the victims appeared to have been hit more than once.

Two of the first four patients the burly volunteer medic loaded into ambulances were children.

“Our inclination is to protect children. The thing is, that wasn’t his inclination,” Brunner said, referring to the gunman. “He wasn’t separating going, `I’m not going to hurt the kids. I’m going to go after whatever adults wronged me.”‘

When gunfire tore through the church in tiny Sutherland Springs, killing more than two dozen, the bullets claimed eight children and teenagers who were sitting through Sunday services with their families. It was the largest number of children killed in a mass shooting since 20 died at Sandy Hook Elementary School in 2012.

Like that massacre in Newtown, Connecticut, the fact that the assailant slaughtered defenseless children compounded the anguish. Nearby schools quickly added grief counsellors.

The shooter, Devin Patrick Kelley, had a turbulent and violent past that included a court-martial while serving in the Air Force on charges that he assaulted his then-wife and hit her child hard enough to fracture the boy’s skull.

Kelley, who had a rifle and left behind at least 15 empty magazines holding 30 rounds each, died of a self-inflicted gunshot wound after he was chased by bystanders and crashed his car.

Investigators have said the shooting appeared to stem from a domestic dispute involving Kelley and his mother-in-law, who sometimes attended services at the church but was not present on Sunday.

One couple who survived the attack, Rosanne Solis and Joaquin Ramirez, said Kelley went aisle by aisle through the pews and shot crying children at point-blank range.

Authorities put the death count at 26, including the unborn baby of one of the slain women and the 14-year-old daughter of the church’s pastor.

McCallum is also a volunteer medic in nearby Floresville who spent 12 hours at the scene Sunday. She identified Crystal and her three dead children — 11-year-old Emily, 13-year-old Greg and 9-year-old Megan.

Another of Crystal’s children, 7-year-old Evelyn, ran out of the church to a neighbour’s house. She suffered a head contusion, which McCallum thinks may have been caused by her head hitting a pew.

The kids were smart and liked church. Their father died six years earlier, but McCallum was relieved when John Holcombe entered the picture and helped raise them as his own.

They called him dad and thrived in the 4-H Club. Emily liked archery while Greg, Evelyn and Megan did karate. Crystal homeschooled the children, and the girls sang in church, where the family got a kick out of how their different voices harmonized.

McCallum said the kids were excited for a new sibling and decided that the baby’s name, whether a boy or girl, should be Billy Bob Wigglebottom — which they found hilarious.

By Wednesday, an online fundraiser had collected more $72,000 for the family.

“To see seasoned FBI agents and seasoned paramedics and seasoned law enforcement officers, when you see their eyes red, I feel so awful for all of the people who responded to that scene. Because they should never have to see anything like that, especially with so many children,” McCallum said.

One of the wounded children, five-year-old Ryland Ward, was hit multiple times and opened his eyes at the hospital Tuesday for the first time since the shooting, said Leslie Ward, the boy’s aunt.

“Seeing the children that were killed. It’s one thing to see an adult, but to see a five-year-old, that’s tough,” Wilson County Sheriff Joe Tackitt said. 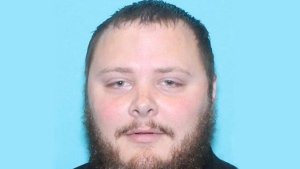 Alison Gould, 17, returned Wednesday to the church where she had waited hours on Sunday for word about her best friend, Haley Krueger, 16. She got the news she feared later that night.

“I am trying my best to cope. I want to see her really bad, and it’s kind of hard because I know that I can’t,” Gould said. “Me and her mom keep thinking that maybe she’s in the hospital, and they just identified her wrong. We’re trying really hard.”

Brunner, chief of the ambulance service in nearby La Vernia, had been at lunch with his own family when he heard about the shooting.

“You had parents screaming about their kids. They got stuff in front of them that they never imagined they would see in their life,” Brunner said. “Not really a war zone, because at least people in a war know they’re in the middle of a war. This is just hard to describe.”

School records showed that Kelley had a disciplinary problems in high school.

In fall 2006, Kelley’s sophomore year, he was suspended and sent to an alternative school for two months after an unspecified drug-related incident.

He was suspended twice as a junior and three times as a senior for reasons including “insubordination,” “profane language/gestures” and “dishonest/false records.”

With each passing year at New Braunfels High School, his grades slipped as well, according to the records. 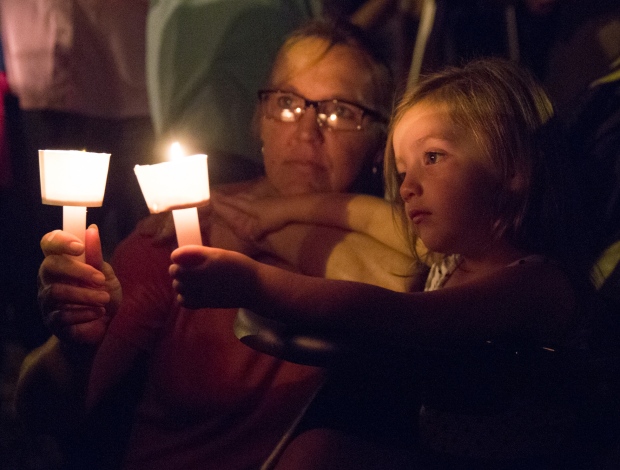 A B-student overall as a freshman, he failed several classes by his senior year and ended up ranked 260 out of 393 students in his graduating class in 2009. He finished with a 2.3 grade-point average.

The records also listed attention deficit hyperactivity disorder as one of his medical conditions.

‘Controlling of his girlfriends’

A former friend said Kelley asked her for sexual favours and prevented his first wife from communicating with her friends. Kelsey Huckaby told Austin television station KTBC that Kelley was “kind of controlling of his girlfriends” in high school.

Huckaby said she lost contact with Kelley until he responded to a Facebook post she made in April asking for a place to stay for her and her boyfriend. She said Kelley offered to let them stay in a trailer on his property if she performed weekly “sexual favours” for him.

Authorities have reviewed video from inside the church where a gunman killed more than two dozen, including footage that shows the assailant shooting victims in the head during Sunday services, a U.S. official said Wednesday.

The official’s account of the video is consistent with statements made by survivors of the attack. The official was not authorized to discuss the matter publicly and spoke to The Associated Press on the condition of anonymity. 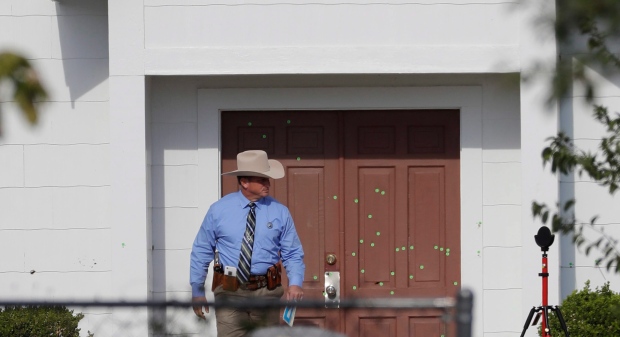 The same U.S. official confirmed that the attacker’s cellphone was an iPhone and that the FBI had not yet asked Apple for help obtaining data from the device.

The church regularly recorded its services, and the footage investigators have seen shows several minutes of the attack because there was “no one to turn it off,” according to a law enforcement official who has seen the video. The official also spoke on condition of anonymity because that person was not authorized to speak publicly about an ongoing investigation.

The agent in charge of the FBI’s San Antonio division said Tuesday agents had not been able to retrieve data from Devin Patrick Kelley’s cellphone.

In a statement Wednesday evening, Apple said it’s offered the FBI technical advice after learning the bureau was trying to access the phone. The company said the FBI had not requested its assistance.

Depending on the model of iPhone and what security features it had, FBI agents might have had a short window to use alternative methods to access its data.

For instance, if the iPhone used Apple’s Touch ID fingerprint sensing system, agents could have tried placing the dead gunman’s finger on the phone to unlock it. But that would only have worked within 48 hours of the last time the phone was locked.