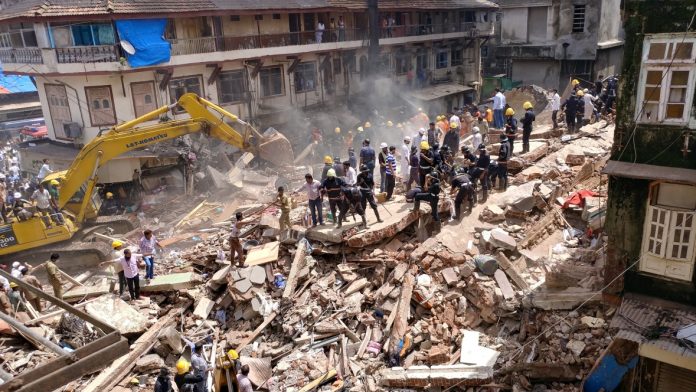 A five-story building collapsed in India’s financial capital of Mumbai, killing seven people and injuring 13 others on Thursday, after torrential rains lashed the country’s west. Another 25 people are feared trapped in the debris.

Rescue workers, police and residents helped pull 13 people out of the rubble and were looking for those buried beneath. The residential building is located in a congested lane of the Bhendi Bazaar area in southern Mumbai.

Thousands of Mumbai buildings that are more than 100 years old are at risk of collapse, their foundations weakened partly by some of the heaviest rainfall that the city has witnessed in more than 15 years.

Authorities were advising people living in an adjacent building to vacate after it developed cracks following Thursday’s collapse.

A police official at the site said it was not immediately clear how many people were trapped in the building.

“We are asking people to check if their family members are safe and accounted for,” said Manoj Sharma. He said nine families lived in the building.

A nursery school was located in the ground floor of the building, but the collapse occurred before the toddlers had arrived for the day.

Building collapses are common in India during the monsoon season, which is June to September. High demand and lax regulations encourage some builders to use substandard materials or add unauthorized extra floors.