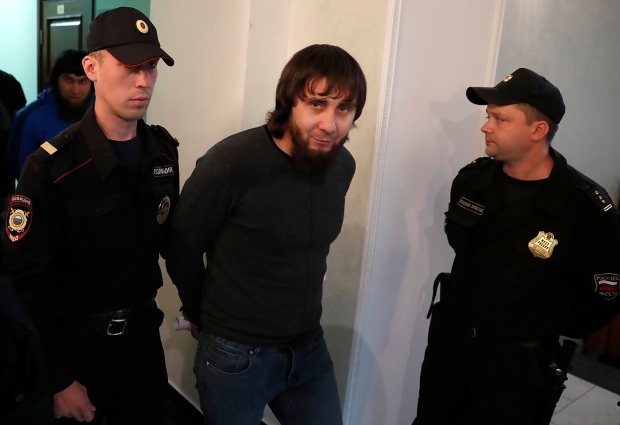 A court on Thursday convicted five men of murdering Russian opposition leader Boris Nemtsov, but the late politician’s allies said the investigation had been a coverup and that the people who had ordered his killing remained at large.

Nemtsov, one of President Vladimir Putin’s most vocal critics, was murdered in 2015 as he walked across a bridge near the Kremlin after dining with his girlfriend. Nemtsov, 55, had been working on a report examining Russia’s role in Ukraine. His killing sent a chill through opposition circles.

After more than eight months of hearings, a jury trial convicted five ethnic Chechen men of his murder, including the man prosecutors said pulled the trigger, Zaur Dadayev, a former soldier in Chechnya.

The four others had acted as his accomplices, it said, and the group had been promised a bounty of 15 million roubles ($253,889 US) for the high-profile assassination, tailing Nemtsov around Moscow before choosing their moment to strike.

Nemtsov’s supporters welcomed the verdict, but said Dadayev and the others were low-level operatives. The case remained unsolved, they said, because those who had ordered, financed and organised the hit had not been caught.

Zaur Dadayev, one of five defendants in Boris Nemtsov murder case, seen on June 22, is the suspected gunman. (Sergei Ilnitsky/EPA)

“It’s the biggest crime of the century and yet they haven’t identified the real organizers or those who ordered it,” Vadim Prokhorov, a lawyer for the late politician’s daughter, told reporters after the verdict.

“The Russian government was not prepared to look into the entourage of [Chechen leader Ramzan] Kadyrov,” he said, despite his view that one of the masterminds was a close associate of the Chechen strongman.

Zhanna Nemtsova, the slain politician’s daughter, has repeatedly said she wanted Kadyrov, the Kremlin-backed head of Chechnya who calls himself “Putin’s foot soldier,” to be questioned about what he knew about the case. Kadyrov has praised the trigger man Dadayev as a “true patriot of Russia.”

But Kadyrov, who has denied allegations he was personally involved, never appeared before the court.

The Kremlin, just like it did when journalist Anna Politkovskaya was murdered in 2006, has downplayed Nemtsov’s significance, calling his killing a “provocation” designed to cause problems for the Russian authorities.

Dmitry Peskov, Putin’s spokesman, said after the verdict that it was up to investigators to decide if further examination of the case was necessary.

Before the verdict, Peskov had said it was “an extraordinarily complex case” and that it sometimes took years to identify and arrest the masterminds in such cases. Investigators have said they are still seeking one man they suspect of having helped organise the killing.

Nemtsov, a former deputy prime minister who was once tipped to succeed Boris Yeltsin as president, a job Putin got, had authored an excoriating report on Putin’s rule and, shortly before he was killed, had been working on a report examining the Russian military’s role in Ukraine. 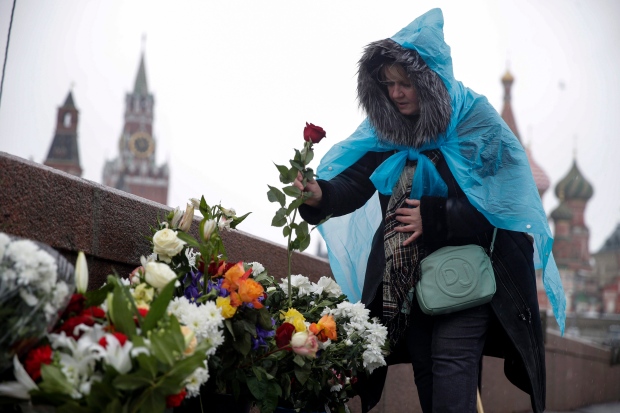 A woman lays flowers at the place where Russian opposition leader Boris Nemtsov was gunned down, next to the Kremlin Wall in Moscow, on Feb. 27, 2017. (Pavel Golovkin/Associated Press)

Though revered by his supporters as an unpretentious man of the people, some Russians disliked him, associating him with the 1990s, an era of political turmoil and painful reforms, when he served in Yeltsin’s government.

Kremlin critics say the trial was flawed. The authorities never handed over CCTV footage of the killing despite it taking place in sight of the Kremlin’s walls. A murder weapon was never recovered, and many witnesses were never summoned. One of the main suspects was also killed — in unclear circumstances — when the authorities tried to detain him in Chechnya.

Olga Mikhailova, a lawyer for Nemtsov’s daughter, told the jurors at the end of the trial that Nemtsov had been a major irritant to the authorities.

“We are absolutely convinced, considering how the murder was organized and carried out, that the roots of the killing go straight to top Russian and Chechen officials,” she said.

Ilya Yashin, Nemtsov’s one-time spokesman, said he and other supporters would try to pressure the authorities into pursuing the people who really stood behind the murder.

Nemtsov’s memory is kept alive in central Moscow where, for more than 700 days and nights, a small group of anti-Kremlin activists has guarded a makeshift memorial to him on the bridge opposite Moscow’s Red Square where he was gunned down. The city authorities have dismantled the memorial several times, but each time activists have rebuilt it.

The five Chechen men will be sentenced by the court at a later date. A lawyer for at least one of them said he would appeal.