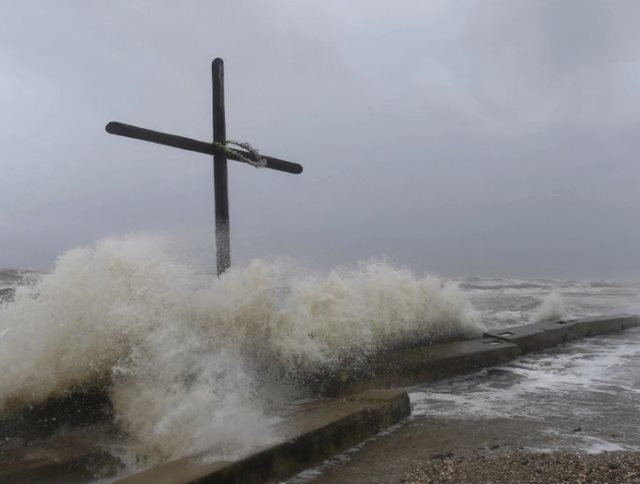 Hurricane Harvey, now a tropical storm, claimed its first human casualty as it slammed into the coastal bend community of Rockport, Texas.  Officials confirmed the fatality Saturday afternoon, although the man died during an overnight fire as the storm ravaged the town.

Rockport Mayor C.J. Wax told reporters his town took the hurricane “right on the nose.” He said officials discovered the body of the deceased man Saturday morning. Officials were unable to respond to the fire Friday night because of the dangers presented by the then-category-4 hurricane.

Aransas County Fire Marshall Rick McLester told Breitbart Texas that about 65 percent of their residents heeded the mandatory evacuation and left town. “That still leaves about 30 to 35 percent of our 25,000 residents who might be in danger,” McLester said as the storm was about to hit.

Mayor pro tem Patrick Rios told a reporter from KIII ABC3 that people who chose not to heed the mandatory evacuation order should make sure that they have their social security number marked on their arm in case identification is needed.

“Those that are going to stay — it’s unfortunate — but they should make some type of preparation to mark their arm with a Sharpie Pen,” Rios told KIII ABC 3 reporter Michael Gibson. “Put their social security number on it, and their name.”

Rockport and neighboring Fulton appear to have taken the brunt of the storm’s devastation. Video reports from the scene show the widespread destruction of homes, businesses and city infrastructure.

“Power lines are down everywhere,” Rockport resident Gene Chernosky told Breitbart Texas Saturday afternoon. “Even the primary power distribution lines coming from the west are down.”

“I am very depressed after seeing this happen to my home town,” Chernosky said. “I was here for Hurricane Celia in 1970. This is much worse.”

Harvey has since been downgraded to a tropical storm but continues to dump massive rainfall on the central Texas coastal communities. The storm has also dropped numerous tornadoes as far north as the Houston metropolitan area.

Bob Price serves as associate editor and senior political news contributor for Breitbart Texas. He is a founding member of the Breitbart Texas team. Follow him on Twitter @BobPriceBBTX, Gab, and Facebook.