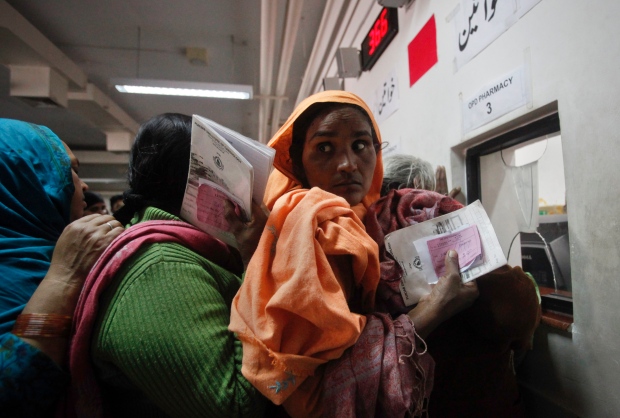 About 11 per cent of medicines in developing countries are counterfeit and likely responsible for the deaths of tens of thousands of children from diseases like malaria and pneumonia every year, the World Health Organization said Tuesday.

WHO’s director-general said the problem mostly affects poor countries. Between 72,000 and 169,000 children may be dying from pneumonia every year after receiving bad drugs. Counterfeit medications might be responsible for an additional 116,000 deaths from malaria mostly in sub-Saharan Africa, according to scientists at the University of Edinburgh and London School of Hygiene and Tropical Medicine commissioned by the WHO.

“Imagine a mother who gives up food or other basic needs to pay for her child’s treatment, unaware that the medicines are substandard or falsified, and then that treatment causes her child to die,” WHO chief Tedros Adhanom Ghebreyesus said in a statement. “This is unacceptable.”

Counterfeit drugs include products that have not been approved by regulators, fail to meet quality standards or deliberately misrepresent an ingredient, according to WHO.

In 2013, WHO set up a voluntary global monitoring system for substandard and fake drugs and has received reports of about 1,500 problematic medicines including drugs that claim to treat heart problems, diabetes, fertility problems, mental health issues and cancer. WHO also reported problems of fake vaccines for diseases including yellow fever and meningitis.

WHO credited the database with saving the lives of several dozen children in Paraguay after an analysis showed they were affected by a contaminated drug contained in a cough medicine that had killed 60 adults in Pakistan several months earlier in 2013.

Women stand in queue to receive free medication from a pharmacy in Lahore, Pakistan, in January 2012. At that time, Pakistan’s government pledged strict accountability for those responsible for the dozens of deaths that occurred due to counterfeit medicine. (Faisal Mahmood/Reuters)

WHO said the cases of fake medicines it found are only “a small fraction” and that problems may be going unreported. The agency estimated countries are spending about $30 billion on counterfeit drugs.

“More research is needed to more accurately estimate the threat posed by substandard and falsified medical products,” the WHO statement issued Tuesday said.

“The bottom line is that this is a global problem,” said Dr. Mariângela Simão, WHO’s assistant director-general for access to medicines, vaccines and pharmaceuticals, in the statement.

“Countries need to assess the extent of the problem at home and co-operate regionally and globally to prevent the traffic of these products and improve detection and response.”